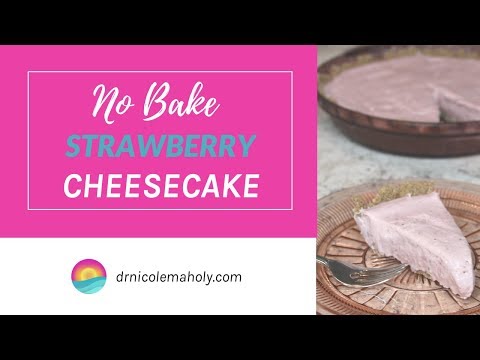 This dessert is perfect for people following a low carbohydrate, ketogenic, or paleo style diet It’s bursting with flavor, but it won’t send your blood sugar soaring or leave you feeling over-full and bloated like traditional desserts To start out, you’ll want to put a can of full fat coconut milk in the refrigerator the night before you plan to make this delicious dessert The ingredients we’re going to be using for the crust include one and a half cups of pecans, a quarter cup of unsweetened shredded coconut, one thirds cup of coconut oil, melted, and two tablespoons of monk fruit sweetener If you don’t have monk fruit, you could also use Swerve in the crust, as that’s the sweetener we’ll be using in the filling

For the cheesecake filling we’ll be using the coconut cream from one can of organic full fat coconut milk We’ll use one cup of Swerve confectioners sweetener, two packages of Kite Hill cream cheese, one teaspoon of lemon juice, one teaspoon of vanilla extract, and one cup of strawberries We’re going to add the pecans to a food processor or a blender, and we’ll pulse it until it reaches a fine meal like consistency Now we’re going to transfer the pecans to a bowl, and we’ll add the shredded coconut, the coconut oil, and the monk fruit sweetener Now we’re going to take this mixture and press it into the bottom and up the sides of a nine and a half inch pie plate

Now I’m going to take a piece of parchment paper, and place it over the top of the cheesecake mixture We’re going to place this in the refrigerator, and let it set for a good four hours, at least Well, I hope you love this cheesecake as much as I do! And this is just a taste of the types of dessert recipes that I share in the Reset & Revitalize Program, which you can learn more about on my website Thank you so much for joining me today, and I’ll look forward to seeing you next time!