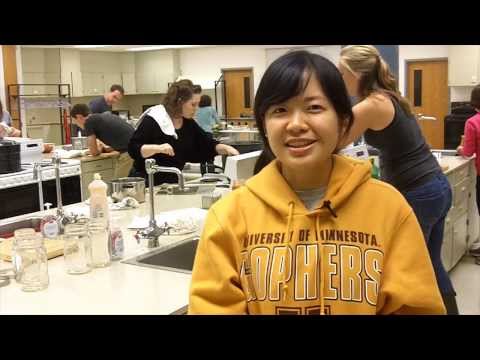 Student interest in learning basic cooking skills combined with a desire to improve student health today and in the future led to the development of the new class Healthy Foods Healthy Lives: Cooking on a Student's Budget CFANS already offered a more in-depth class — a three credit lecture and lab course called Healthy Foods, Healthy Lives: A Food System Approach to Cooking, but more was needed

While there was great interest in that lecture lab with those students that have already a developed interest in food systems we were missing a whole category of students that just really wanted to learn how to cook, so we decided to decouple the lab from the lecture and offer it as a stand alone for those students that just wanted to get into the kitchen Many of today's students grew up with little experience in cooking and universities are also finding that students are likely to make unhealthy food choices The Healthy Foods, Healthy Lives Institute is working with groups both within the university and outside the university on just basic public health interventions that have to do with cooking – food literacy And the more work we do with these various groups we’re learning that learning how to cook is one of those fundamental skills that is at the root of being able to change people’s eating behaviors And so we really felt that it was important to offer something here within the university environment for students that would give them the skills to be able to take back into their own kitchens so that they would be able to feed themselves

We know the home ec courses don’t exist at the same level that they did even when I was in school, so a lot of the students who come to the university system are coming out of a K-12 system that probably didn’t given them any kitchen exposure Also, they’re coming from households where often times you’ve got two parents working They’re probably not working in the kitchen as much as again previous generations might have seen So we have just a general lack of knowledge around cooking in this generation The other thing just recently one of our previous board members, Melissa Nelson Laska, came out with a study that showed that university students – University of Minnesota students – have diets that are consistent with what we see with people who eat primarily fast food

So we’re seeing that students when they’re not preparing their meals at home – when they’re not preplanning for the week, they’re in that position where they’re at the university where they have to do grab and go eating Or they’re going to grab whatever is most affordable or whatever looks the best to them in that limited amount of time that they have So, we really felt it was an important tool It’s not just about learning how to cook It’s about learning how to budget your time and your money so that you can have a week’s worth of meals available to you, so you’re not as susceptible to that grab and go eating habit that a lot of university students are showing that they have

Junior nutrition major Yimei Chen made taking this class a priority It’s important for me because I’m going to become a nutritionist/dietician I think it’s very essential for someone doing dietetics to know basics of cooking because without knowing how to cook, you can’t really tell people how to eat healthy without demonstrating how to eat healthy So this is one of the reasons why I took this course Students in the class have varying levels of experience cooking

I have very little skills in cooking and that’s another reason why I came to learn the chopping skills and the basic boiling, roasting and baking This class will not only help Chen personally to eat healthy, but prepare her to teach others to eat healthy as well I hope to be able to when I go out there and see people who are attempting to eat better, to eat healthier I’m hoping to demonstrate the basic skills in cooking – showing them how to cook a very basic healthy recipe That’s what I’m hoping to get out of this

The students not only appreciate the tasty, healthy dishes they now know how to create, but they're thankful for being able to cook meals that won't break their budgets Als, we’re learning how to budget in this class which I really like As students, we don’t have much, so I think it’s always to be able to show people how to save on their groceries and cook healthy, cheap meals – draft Healthy, cheap, fast meals To learn more about both classes, visit the Healthy Foods, Healthy Lives website For CFANS, I'm Patty Mattern