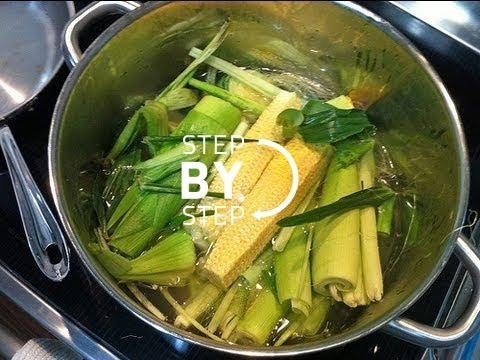 I am a diehard reader, I absolutely love to read, and I've always got a book, or 3, or more on my phone I read constantly

The [inaudible: 00:27] reader thing was my cup of tea One of the things I've been playing around with are some of the not the food trend, but some of the food philosophy that goes right along with how I think

I didn't realize that there's an entire movement called Stem-to-Root Cooking Hang on; my bacon's trying to get me I did hear about Snout-to-Tail Cooking; that's simply where you don't let anything go to waste You use every bit of the animal That came out of England a few years ago, and it is very much an Appalachian mindset, because that's how we grew up cooking around here

The whole Stem-to-Root, same thing but it involves plants; eating things that you didn't necessarily grow up eating I had seen people do this before, and I've tried it several times in the past After reading some of that stuff, I decided to see just how far I could go with it, and I was amazed at what I ended up with I like it, because in my opinion, this is pretty much free food I've been playing a lot with corn

I've cut about 12 to 15 cobs Cut all the kernels off, and I've got the little corn cobs You can throw it in your compost pile, or if you have chickens, I could throw it out for my chickens I don't have any of those things What I do have is a big fat pot of water, and what I'm going to show is how to make the most beautiful golden broth that you've ever had, and we're going to make a soup out of it

Hot water; this is actually the water that I blanched some corn in a little while ago It's already had a touch of corn, but we're going to really kick up the flavor a lot All of my cobs are going to go in here I've done a lot on different kinds of stock I really think that if you learn to make your own stock, first of all, you'll be astonished at how easy it is

It's going to be one of the best things you can do for yourself flavor-wise, as far as learning how to cook This is just another type of stock Brilliant, stock is beautiful All of my corn cobs are going in here I'm going to make sure that we don't get much more than a simmer

To this, I am going to add a little bit to round out the flavor and give it some depth I've got an onion I've got that much out of the middle of a package of celery that I just about finished up, a couple of carrots Right here, if I had I love fresh thyme; that's one of my favorite herbs I don't have fresh thyme; I've got a little dried thyme If you've bought a bunch of parsley and you've picked all the leaves off, bundle up all the stems, throw that in there Do the same thing with a bunch of thyme

If you've used everything but the stems, don't throw those away, that's part of the whole maximizing every penny that you can get I think it's a brilliant idea I do have a bay leaf About 1½ teaspoon dried thyme, ½ teaspoon of black pepper, because corn and black pepper are fabulous Then all I'm going to do to this now is just a pinch of salt, not too much

We salted the water that the corn was in originally, and we're going to continue to taste it and adjust for seasonings as we go You want to layer the seasonings in; don't wait until the last minute because then it will never taste right This is simply going to sit here and it's going to percolate on the back of the stove for about an hour When that's done, we're going to strain it I'll show you what we end up with, because I think this is just about ready

Forgot I was wearing my sexy mittens again We let our corn stock go for about 1 hour, and it simmered away Look how pretty All I did was I pulled all of the corn cobs out and dropped them in the garbage Then run this first strainer

I don't use cheesecloth just because I have a hard time finding it around here What I do use are these bleached towels, little cotton washcloths that I keep for that Run it through a strainer and get all of the little thyme and pepper bits They don't look pretty This is now ready to use

The fragrance is unbelievable, and the color is the most beautiful golden color In a minute, I am going to start a big pot of corn soup that's going to be creamy and luscious, and about as corny as anything you have ever tasted If you liked this video and you want more great tips, tricks, and techniques, check out the website at ThrillbillyGourmetcom You can Like me on Facebook under The Thrillbilly Gourmet, and you can follow me on Twitter under @JanCharles or @TheThrillbilly

I'm on Pinterest now too, under Jan Charles I've also got two brand new Podcasts, both of which you can find on iTunes: The Thrillbilly Gourmet, and The Food City Kitchen on WVLT with Chef Walter Lambert and Jan Charles Make sure you subscribe You can ask a question, you can leave a comment, and I will get back to you as soon as I can Thanks for visiting