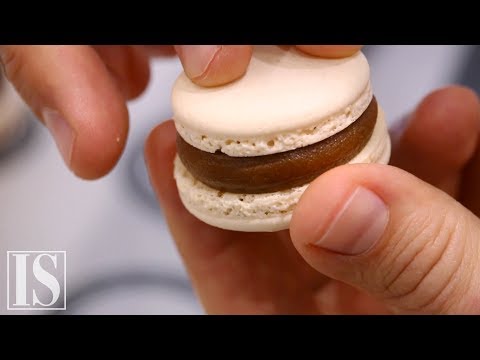 Good morning everybody, I'm Gino Fabbri Today we're in the province of Venice inside Hangar78 School

Let's start with the making of amaretto, a product from Italy, proposing it in a more catchy way: macaron Today we're making a Cappuccino Macaron To make this recipe, by my side is Marco Mazzini, my right arm in the pastry laboratory Let's start with the ingredients For the dough: powdered sugar, almond flour albumen and some colorant

We're making another base with an Italian meringue that we're preparing with water, sugar and albumen Let's start with the making of the dough We should start with the TPT What is TPT? It's the mix between almond flour naturally reduced to a powder This flour should've already undergone a drying the day before in the oven, for about 6 to 8 hours, at about 100°C

We're mixing it with the powdered sugar We're mixing it and we're already done with our TPT It's a very important phase as this is the solid structure of the macaron Marco is now beginning with the Italian meringue We're making a syrup with sugar, where Marco is pouring water in, then sugar – the first sugar, We should also start beating the albumen

We still have a moment I'm now adding that bit of sugar we left aside before to give a greater structure to the albumen We can notice a nice beating when the whip strings leave this mark, this trail This is an important passage for the Italian meringue We should proceed in order to synchronize the temperature of the syrup and the beating of the albumen

While Marco is waiting and checking how the meringue cools down, we'll start coloring the dough I'm taking the needed color and adding it in the albumen that was left aside I'm pouring it in the TPT and starting with a maryse or a scraper to incorporate As we reach a temperature of about 50°C, we're ready to add the meringue inside the dough Let's remove the meringue from the whip and, with a few moves each time, we're starting the so-called "macaronage"

You can see how it starts detaching from the borders, leaving a trail of "macaronaged" product It shouldn't contain air: if we have the right quantity of air – THAT is the secret – we'll have a macaron that is nice, sustained, rich, airy, but without any external crust or a base that is very thick – as it is said in the gergal language Let's now proceed with the "dressage", meaning the preparation of the macaron mold Marco is now filling the sac-a-poche with the macaron mass we prepared before The macaron should have a smooth opening of 8 mm diameter The sac-a-poche shouldn't be completely full as it should allow maneuvers, right and stable

Now Marco is using the sac-a-poche on these mats These are brilliant, as the circle is already there and he just has to squeeze the sac-a-poche until the size we want to create In this phase, we need to make the shell, that is what Marco is creating In this case, being it Cappuccino flavored, we preferred a lighter color, that is not white nor very similar to coffee The color is obviously very subjective: you can create the color you want, according to what you think is more suitable

You can also create two pairings in flavor and taste, such as a light shell and a dark one and consequently, diverse cromatisms in the presentation itself Once "dressaged", we're preparing two mats on the table in silicon, perfectly suited for this operation Two hits, to structurate them well and remove any spike that was created We can also use a folded cloth, what's important is to be able to give these two hits and sotfen them: never directly on the table, if possible We're then letting them stand for a moment, half an hour, to let them create this film, fundamental in the cooking phase

When they become opaque, we can move to the cooking phase Let's put them in the oven at a temperature of 130°C for about 16 minutes Here are our macarons, perfectly cooked For the filling, we'll start with the ganache It is composed of these ingredients: cream, lyophilized coffee, inverted sugar, coffee beans, milk chocolate and butter

The commonest are: bain-marie, or heating it in a microwave The microwave is perfectly fine for this kind of work, as we don't have any stteam leak that would harden the chocolate Let's sift the coffee-flavored cream I'm checking the chocolate as it reaches 45°C Marco, in the meantime, is creating a mixture with the lyophilized coffee in the cream where we already sifted the coffee beans

Consequently, we're starting to give a structure to the ganache We incorporated the inverted sugar I'm taking the fused chocolate and adding it inside the container, trying to maintain the temperature of the chocolate stable, while Marco is making the other part Taking the flavored base we have, we're creating an emulsion The emulsion should be done in at least three times

Our ganache should look like this: shiny, smooth, elegant I'm taking the butter We cut it in pieces before to make this mixture easier This is another part of a so-called "emulsion" We're adding the butter in pieces, maybe in a pair of times to be facilitated in the mixture

A smaller, initial part of the mixture is made by hand, in this way We're now doing the mixing It's important not to incorporate a lot of air, so the stick should always be kept under the mass Here we finished our ganache, waiting now to stand Depending on the chocolate we are using, it needs different times to stand

If dark, it needs at least 12 – 24 hours standing to crystallize, if milk it needs around 48 hours, if white it's even 72 hours standing We prepared a tray with a border We're now pouring our ganache inside and spreading it more or less uniformly We're covering it and letting it stand for two days Our ganache already crystallized

After 48 hours, we're finding it with this consistency: it's soft but well sustained and rich The filling is an important passage to obtain the right consistency when biting, as well Let's take our macarons, our shells, upside down to be able to fill them, and we're making this operation We're taking our two shells and placing them, then we're pressing them on both sides to make the ganache leak on all sides, then we're taking them and placing them in the containers These are Silikomart containers, made for macarons in particular

Now we just have to close them to avoid humidity to come inside We're placing them in a freezer for some hours, we're then removing them and placing them in a fridge for 2/3 hours Only then, we'll find a perfect macaron to taste, without it having a very strong elasticity to the palate Those were the macarons You can now use your own tastes without filling, as you like best

You can create desserts decorations, mono-portion finishings, or self-made pastry, always staying faithful to the basic use Be creative and most of all, have fun! Have a nice work!