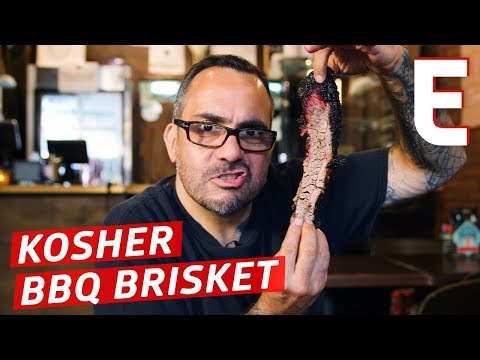 The Meat Show is coming to you from Crown Heights, Brooklyn today I'm here to eat kosher barbecue

Apart from the fact that this is really delicious barbecue there's a really unique story here and it's that Izzy can't actually eat most barbecue 'cause it's not kosher and he keeps a kosher diet Yet he's absolutely nailed the flavor and texture of Central Texas-style barbecue Let's go inside, let's see how he does it, and most importantly let's see how it tastes (rock music) I was exposed to your barbecue at Brisket King when I was one of the judges It was unanimous

Like I remember distinctly because I put the pastrami in my mouth, and I looked up at Jake Dell who owns Katz's Deli We're both chewing the pastrami and we just look at each other and we're just like what? And then with the brisket I'm doing the same thing I look at Billy Gurney and then Aaron Franklin's next to me it was the exact same reaction Like it was visceral it was just so perfectly cooked I mean, totally nailed it We definitely felt proud of what we turned in

We probably spent like 300 bucks that day Just eating brisket Just eating brisket and a light bulb went off in my head and ever since then I've been obsessed with barbecue, the art of woodfire cooking I started doing it at, from my house on a gas grill at the time It was so awful Ever since then I've been pushing and pushing at a certain point my family couldn't eat any brisket anymore like, they were done

Like we don't want any more brisket Enough we just want to grill a dry chicken So let's talk about actually what kosher meat is Obviously you don't eat pork The process of kosher people have a misconception I feel like is that if you bless the animal, that's what makes it kosher

However, it's more along the lines of animal has to be healthy, it can't have any injuries A professional rabbi, Shechitah it's called, somebody who slaughters the animal, he has to do the slaughtering process The animal can't suffer while its being slaughtered Once the animal is inspected and it's slaughtered, they do a salting process which drains all the blood, so by default, kosher meat is generally way more salty than non-kosher meats and that's something we really had to play with in the beginning just, figuring out our rub Right, because the fact that it's kind of been cured, if you were to put a pure Texas rub on it it would be Would not be edible Too salty

Would not be edible Forget about too salty, it would not be edible You've actually taken tours of Texas, you've gone to all of these fantastic smokehouses, you've prodded and looked at and felt the brisket but you don't, you can't eat it 'cause it's not kosher, right? One of the biggest inspirations for me is that not being able to eat Aaron, and Billy's and all these famous people's meat It drives me nuts So I'm constantly obsessed with getting, how could I do better but I can't eat it

So you're really kind of bringing that ethos and that sort of culture to kosher in general right because there's kosher burger joints, but I've, there's no kosher barbecue restaurants Well maybe one in Chicago, um, maybe one in Teaneck, and that's about it, really So I would love to get back and see your pits and, you know maybe we could look at some of the meat, and then of course, most importantly eat all of the meat Come in the kitchen (laughs) (heavy rock music) So, let's start with the lean, because that's actually the sign of good barbecue Any fool could probably render, the fatty part of the brisket tender and juicy

I mean it's just all fat This however, is much more challenging and I can feel texturally already, it's like just crumbling apart Mmmm There's a tackiness to it, right? It's that gelatinous feel It sounds weird but like, really good lean brisket often kinda' looks like tuna fish

The way it kind of falls apart but it has that sort of suppleness to it Let's try the deckle, the fatty part So you really want this sort of accordion effect where it, it pulls out gently, but then it kind of tugs back on itself That's a sign of a properly cooked brisket Look at that

I love the way it sorta' just comes apart at the seams Mmmm It actually conveys more of beef flavor than most briskets because, the seasoning is not as intense as it might be, I mean, it definitely has the perfect bark on it But you saw when he was salting it and seasoning it, it wasn't the really dense rub that a lot of places have Often times when you look at meat that's been smoked or cured, and you slice it there'll be a rainbow effect

Guys that's not spoilage there's nothing wrong with it, that's actually the fraction of light There's a film on the surface that causes that to happen with cured meats So don't judge a book by its cover if it's a rainbow The brisket is challenging to cook because it's two very different muscles It's almost like trying to cook a porterhouse steak or roasting a chicken

There's light meat, there's dark meat, right? So the challenge is always to cook both to their best effect and I think that's really been accomplished here What I think is really impressive about this is not just that he's nailed the flavor and the texture of Texas barbecue but, that he's done so without the ability of actually eating the food that he's emulating And I would have sworn, like yeah, this is Texas barbecue from Texas Thank you so much for watching I'm gonna sit here, polish off the rest of this brisket feast

And I'll see you on the next episode of The Meat Show Assuming I live Now let's meet the man himself, Fergus Henderson Let's eat a few of the dishes, and I will reveal to you why this is my favorite restaurant