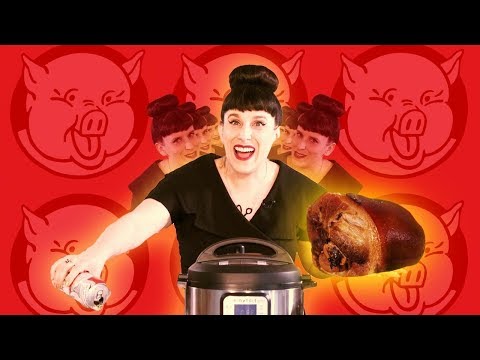 (hissing) – This is the only relaxation I ever get from my life of roast making Hi, I'm Kat and I love my Instant Pot, and I'm pretty sure my Instant Pot loves me back

Oh, who am I kidding? I know my Instant Pot loves me (squeaking) We're in a committed relationship that is so secure, we've invited a few friends along today to help us out with an experiment involving pork (upbeat music) Which one of these devices, the Instant Pot, plain old Dutch Oven, or a slow cooker, could most efficiently and pleasantly cook a pork shoulder? What we're gonna try here is a very, very simple pork shoulder recipe We're actually gonna start with the Dutch Oven and with the slow cooker, cause Instant Pot doesn't need a whole lot of time Hence the Instant part of it

We're just gonna put the pork shoulder into the slow cooker (beeping) By the way, you saw that I just touched raw pork with my bare hands Of course I'm washing my hands in between each one of these shots It's just too boring to show you Into the Dutch Oven

We're just gonna crack a tallboy of American beer, and pour it (can snapping) over top of our friend here Beer bath And some boxed chicken stock, because really, who has time Some more over here Each one of these gets two halves of an onion, some Worchestershire sauce, as much as brings you personal joy

We're just gonna pop this in the oven 325, lowish and slowish for about 4 hours We'll see you later This one, we're gonna set on high for, I'm gonna for four hours, and see where this takes us We're gonna use the same recipe that we used for both the slow cooker and the Dutch Oven, because we want to make it equal across the board

It's not a competition, but also, it is (squeaking) (robotic speaking) (gonging) Pork shoulder in Nice tallboy of American beer Some stock Onion halves

A healthy dose of Worchestershire sauce Sing to me your little song (melodic chiming) There we go High pressure, beep One hour, beep, beep, beep

That is Instant Pot for I've got you Your pork is safe with me (squeaking) Right now, it's just a waiting game (quirky music) (clicking) All right, you know what time it is Time to release the Instant Pot

(hissing) This is the only relaxation I ever get from my life of roast making Now, it's time to test We've got the Dutch Oven shoulder, the Instant Pot shoulder, and the slow cooker shoulder I gotta say this one wins on visual appeal Let's see what happens when, I don't want to have to bust out a knife when I am eating pulled pork

I want it to be able to fall apart Oh, the way it's sinking into that fat layer is a stunning thing in, oh, oh look at that This was in the Dutch Oven at 325 for four hours This, from our old pal Instant Pot, only in there for an hour or so It's drier

(robotic squeaking) They had pretty much the same amount of liquid in there The way it's pulling apart is not in as luscious a fashion, and I'm not mad at it in the least bit I could, I couldn't be mad at Instant Pot That's in the contract Okay, let's get to the slow cooker one

Sort of a mix of the two The way that the braising liquid evaporated is why you see some color difference there But, the important thing is how does it taste? Dutch Oven, it's almost rude how good that is Instant Pot, come through for me That is totally passable pork, especially for one hour

If somebody showed up with this, I wouldn't kick 'em out I'm not, I'm just not rude like that All right slow cooker, what ya got? This has more of a roasted pork quality, as opposed to braised It's perfectly delicious Texturally, you know, it's, it just feels like a different animal than these two

Do I have to pick a winner? Our four hour Dutch Oven slow cooker is our winner for delciousness, appearance, all of the above My pal Instant Pot, my beloved Instant Pot, in no way failed me This took a quarter of the time of these two other pork shoulders, so you did good baby You did good There are few better feelings in the universe than coming into your home and having pork waiting for you

What's the moral of all this? I don't know Pork is great Pork shoulders are great Do you need an Instant Pot? Again, need is relative I need two