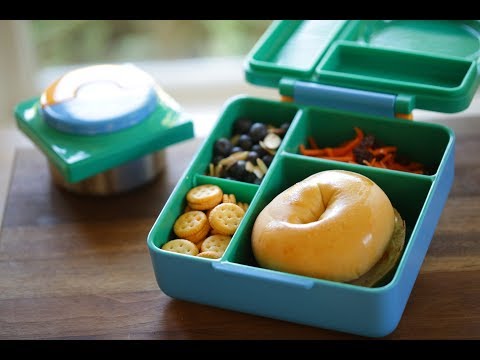 – Hey, guys, with back-to-school right upon us, I thought you might be ready for some new lunchbox inspiration So since my last video was such a hit with you all, 3 Lunches You Can Make From Leftovers, I thought I would give you three more lunches you can make from leftovers

These could be things you might already have sitting in your fridge And special thanks to Keebler Club Bites for sponsoring this video and collaborating with me on this episode So this time around, I wanted to give you some new ideas that might get outside your comfort zone a little bit I find that sometimes it's good to push the envelope when it comes to kids because you need to get them to try new things And my theory is give them two to three things that are familiar, that they like, and then throw in something new

A little curve ball they may not have tried That way they might be more apt to try the whole thing So most kids will eat a ham sandwich, right? And who doesn't love a bagel? So I like to make this sandwich when I have a little bit of leftover brie sitting in the fridge from a weekend party All you do is you slice the bagel You could toast it if you wanted to, or you could just leave it plain

Then I spread some of the brie cheese on both sides of the bagel Then add a little bit of apricot jam, maybe about a teaspoon or so And then pile on top of that some black forest ham Now this might sound like a really strange sandwich, but I'm telling you the combination of the creamy brie, the sweet jam, and then that salty ham is so delicious It's familiar but then a little bit gourmet in the right kinda way that I think will really get your kids excited about lunch

And hey, Mom, it's a great one for you, too, as you're headed off to work Then to go with the sandwich, I'm going to pack some Keebler Club Bites This is a new mini-sandwich cracker that Keebler just introduced that my kids are going nuts for They're made with 100% real cheese, and they also come in the peanut butter variety So one of my daughters likes the cheese, and the other one likes the peanut butter

So that way, it makes the both of them happy However, if your school has nut restrictions, where you can't bring anything that has peanuts or any kind of nut in it, you might just stick with the cheese These crackers are great for the lunchbox, but it's also a really good snack when you're on the go My girls love to eat them after school when they're on their way to activities because it's a little bit more filling than a regular cracker Then I also like to pack some grated carrots and some raisins

I love this because you don't really have to prep a lot in the morning All you do is grab a handful of those grated carrots, throw in the raisins, and you're good to go And then in the other compartment, I'll throw in some blueberries and some sliced raw almonds I love blueberries for fruit in a lunchbox because, again, you don't have to peel it or cut them They're so quick and easy, you just pop them in a lunchbox

And there you have it! Lunch number one all ready to go So next up, if you have some leftover rice sitting in your fridge, you can turn that into a delicious stir fried rice All you're gonna do is take out a large non-stick skillet And to that, you're gonna add two teaspoons of some unflavored oil You could use vegetable oil, canola oil, whatever you have

Then you're gonna add a cup of your leftover rice Two tablespoons of frozen peas A quarter cup of grated carrots And then I take two broccoli florets and just cut them into smaller, bite-sized pieces, and throw those in as well And then you can saute that up a little bit, just to get those vegetables a chance to soften up and for the rice to cook and get warmed through

And then you're gonna add anywhere from one to two tablespoons of soy sauce depending on how saucy your kids like it Then for a little bit of flavor, I like to add a quarter teaspoon of toasted sesame oil Okay, so then at this point, your rice is pretty much ready to go What I do is I just push everything over to the side to allow myself a clean area where I'm gonna scramble my egg I do like to add a little scrambled egg to this just to give the kids a little bit more protein

But you could leave it as is just like this, too, if you didn't want tot take this step But basically what I do is I take an egg, stir it up in a cup, and then slowly pour it into the pan And then give it a stir and kind of scramble all the while That way, you won't kind of scramble up the rice with the egg, and you'll get those nice curds of egg And then you can combine the egg with the rice, and there you go! You've got a delicious little lunch on your hand

And then you can transfer it to a thermos Make sure you use a thermos that will keep this warm for at least four to five hours This is such a yummy little lunch that sometimes, to tell you the truth, I will have this for dinner If I'm running late and there isn't much in the fridge, this is a great one to whip up So now for the snacks

This is an idea I came up with one fall when my kids were kind of going nuts with all the candy that was around from Halloween, and they wanted candy in the lunchbox And I said, you know what? I'm gonna make you Mother Nature's candy bar And they were all like, ooh, what's that? So here's how you make the Mother Nature's candy bar You're gonna take some sliced apple wedges, and put those in your lunchbox Then to that, you add either peanut butter or almond butter

Either one And I also pack raisins and some shredded, unsweetened coconut And the idea is you take an apple You spread some peanut butter on top Add the raisins, and then the shredded coconut

You know how candy usually has some kind of nut, something chewy, and something salty and crunchy Well, that way, it sort of mimic the idea of a candy bar It is a great flavor combination So you may try it at your house, and see if they find Mother Nature's candy bar So there you have it

Number two A hot lunch ready to go Next up, if you have any mashed potatoes sitting in the fridge from a Sunday night dinner, I'm gonna show you how to make a delicious and easy potato corn chowder This is a great lunch idea for when the weather starts to turn cold You can make a big batch of it on Sunday night and have it last throughout the week

So in a blender, you're going to add a cup of your leftover mashed potatoes And a cup of either chicken broth or vegetable broth if you wanna keep it vegetarian And then you're just gonna whirl that up until everything is nice and blended And then you can check for consistency Depending on how thick your mashed potatoes are, you might need to add either more or less of the broth

Then you're just gonna pour that out into a saucepan Add a quarter cup of frozen corn And then at this stage, I would taste it for seasoning So depending on how seasoned your mashed potatoes were when you made them, you many need to add a little bit of salt or pepper, or they might just be perfect Then you can pour it into your thermos

And then I like to add a little bit of chopped parsley on the top just for a little bit of freshness And then for snacks, I like to add some fresh mozzarella balls and some cherry tomatoes And I also like to pop in some raw cashews My kids love cashews because they're just such an easy nut for kids They're soft and easy to chew and also have that nice kind of buttery flavor to them

And then to stretch their taste buds a little bit, I like to add sea salt and some dried rosemary And then for a fruit, I like to add some sliced pears topped with a little bit of pumpkin pie spice Especially at this time of year, it's a really nice warming flavor If you live outside the US

and you can't get pumpkin pie spice, I'll leave you a link in the description for how you can make your own And there you have it A tasty lunch idea made from those leftover mashed potatoes I hope you guys give these lunches a try And let me know what you think