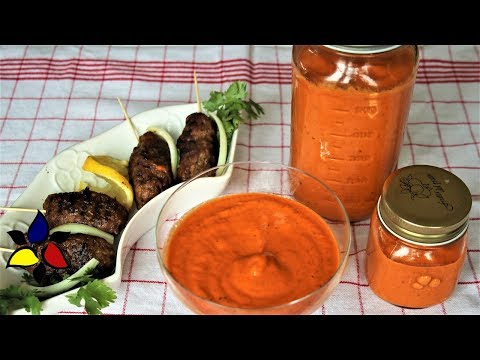 The macro nutrient ratio for this recipe is three point three to one with six point five grams of total carbs, two point five grams of dietary fiber, resulting in four grams of net carbs per 75 gram serving for this recipe There are only a few ingredients, but when they're combined they complement each other perfectly In preparing this recipe, the first step is to start by cutting the red bell peppers into halves, removing the top and the seeds and the white skin from the center Place the cut peppers or capsicums the cut side down on the parchment lined baking sheet Also, cut the eggplant in half and place the cut side down beside the red peppers

Pre-heat your oven and bake at 190 degrees Celsius or 375 degrees Fahrenheit in the middle position of your oven It's difficult to give you a precise time to bake because the shape and size of your capsicum and eggplant will determine the baking time, but what you want to do is bake until the skin is starting to turn brown and the skin is starting to lift off, and when you gently press on the bell pepper, it feels soft to your touch When your vegetables are done, let them cool until you can handle them comfortably Some people put the hot vegetables into a zip-lock baggie which helps to keep the moisture in and allows for the skin to come off more easily, but that's up to you Peel the skin off the red pepper and place it in the blender

One complete batch, as per the ingredients I specified, will yield you 425 grams or approximately 15 ounces of sauce I consider one serving to be 75 grams or 26 ounces as I mentioned earlier At this point, in traditional recipes, the sauce is transferred into a pot and cooked for several hours I don't do this, because if you cook the sauce for this long, you're basically reducing the nutrient value of the red peppers and the eggplant, and in my opinion I prefer that the puree taste of these two vegetables comes through better when it hasn't been stewed for several hours

But if you want you can cook it Another point I'd like to clarify is that there are many variations of this roasted red pepper sauce, throughout the Balkans and in areas of Turkey and they all have their own distinct names One variation I'll be making is muhammara, which is also very delicious One last nickname I'd like to share with you: in the Bosnian area they call this Bosnian caviar When your sauce is done, you can use as much as you need for your cevapcici right away

Other ways you can use this sauce are, for example, as a dipping sauce for a veggie platter or a dip for nacho chips, as we are also doing with the cevapcici Other ways I use this sauce is to replace marinara or bolognese on top of zoodles or spaghetti squash It's really tasty Just sprinkle a little bit of parmesan, or if you're wanting to keep it vegetarian, some chopped nuts such as walnuts and pecans and any leftover Ajvar you're not using right away you can store in mason jars or sealable containers This sauce will keep in the refrigerator for about a week

It also freezes quite well, but if you're freezing it put it in single serving containers and don't forget to label and date I hope you enjoyed this recipe Thank you for watching this video I hope to see you next time! The link for the printable recipe is provided in the description below