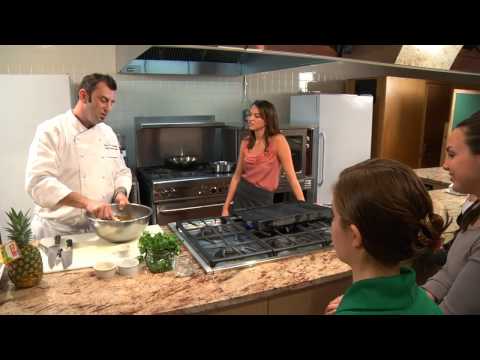 , Walter Dunphy, here to give us his chef expertise on how to put together some really simple dishes that have a lot of flavor Healthy Cooking on a Budget is a PDP class that we teach over at the Fitrec, and I really started teaching the class because, you know, we talk a lot about nutrition, we offer nutrition counseling, but, it's really that next step Like, alright, I can tell you what to buy at the grocery store, but what are you going to do with those healthy ingredients? We're going to start with two basic common denominators We're going to work with chicken and brown rice I'm going to show you some different flavor combinations that are going to give you really powerful ethnic flavors

I've got clean, four-ounce chicken breasts We're going to add the marinade to it You want to coat this well, and it's not attractive, as you'll notice, but it's just the way it is It's the flavor you want You can do just about any kind of meat like this, fish, do it on the grill

It's going to come out awesome My goal is for students to kind of get all these skills and then be able to take them on with them And we know, you know, like making your own food and cooking at home is such an important skill, and the people that do it more often, often, you know, tend to eat better We have mango, papaya and pineapple in here, and this is going to be nice and sweet, and a little savory So it's Caribbean Jerk Chicken, tropical fruit salsa, brown rice

So it's healthy, it's super nutritious, a lot of flavor, and it didn't really take that long to put together This is actually the first time I've ever had papaya and it's really good I love it I'm living in my own apartment next year and I try to cook for myself as much as I can, you know, try to save some money, try to eat healthy, and this class has been great I mean I've already used a ton of the things I've learned in it

I cook a lot more now than I used to, for sure