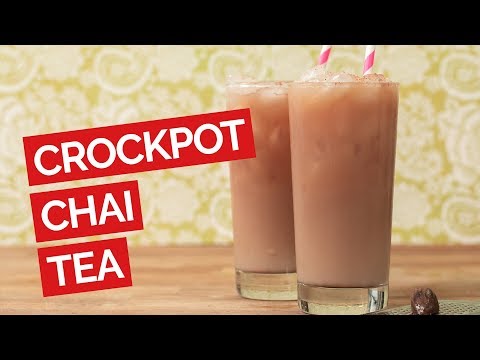 (upbeat music) – Hi everyone, I'm Jerry James Stone and today's recipe is a wonderful crock pot masala chai Here's a couple of things that are amazing about this recipe

First off you do it in a crock pot you don't have to think about it and because it's sitting there and it's simmering for hours it makes your house smell amazing So move over Febreze, it's super great Okay so to start off we're gonna add water and then we're gonna add in our spices We're gonna be using cardamon pods, so we're gonna add the cardamon pods to our little pestle and mortar and we're gonna just grind those in a little bit, and then add them to the crock pot I'm using whole cinnamon sticks

I don't recommend using any ground spices for this recipe, you're gonna get a whole lot more flavor with the whole spices because this thing's gonna be cooking for hours Add in some peppercorn, some clove, some fresh ginger and some star anise So go ahead and throw on the cover and you usually let that go for about eight hours at a very low, low setting This is wonderful to do overnight or while you're at work Either way your house is gonna smell amazing

So after that's been simmering for about eight hours in your crock pot, like go ahead and strain out all those spices Now if you wanna sweeten it, this is up to you, this is the perfect time to add in your sweetener I suggest brown sugar, you go ahead and add that in It'll dissolve and mix in quite nicely Then you wanna add in your tea

The reason you're doing the tea at the very last part is because if you let the tea simmer for too long it's actually gonna bring our those bitters and those tannins, so you actually wanna put the tea in for whatever the suggested time is Usually for black tea it's about three to five minutes Then remove the tea bags and you're good to go By the way, people say chai tea all the time like if you're at a coffee shop and the funny thing about that is the word chai actually means tea So when you're saying chai tea, you're saying tea, tea

Masala chai is actually the spiced tea, that's what it was originally called So now that it's finished you can serve it in multiple ways I like mine iced, serve it over some ice, top it off with a little bit of soy milk and then some freshly grated nutmeg and you have the perfect chai latte So there you have it, it's super good, it's tasty, it's full of spices It makes the house feel and smell wonderful

If you like this video give me a thumbs up If this is your first time watching, subscribe, and hey, drop a comment if you wanna talk about food I'll see you guys next time