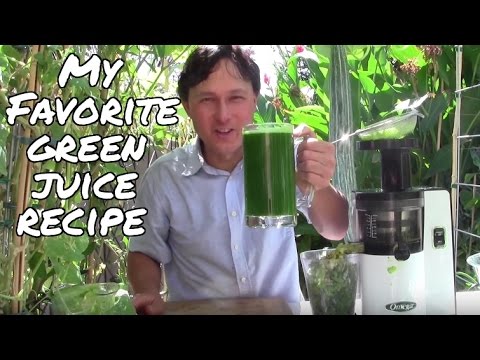 Alright! This is John Kohler with discountjuicerscom

Today we have another exciting episode for you, coming at you from my backyard garden Yes, this is a nice large cucumber hanging next to me I'm not picking that one today, but what I am juicing is one of my favorite green juices My favorite green juices are greens that are in season right now at the time So I always want to encourage you guys to rotate the different juices you make, even if this is somebody's favorite lemon ginger blast or whatever kind of juice, switch up the recipes, change a few ingredients

Don't always juice spinach, don't always juice kale, don't always juice bok choy or lettuce, keep rotating different ones in  I want to encourage you guys also to experiment when juicing One of the biggest tips I can give you guys when experimenting and making up your own juices is try to keep it simple As you guys are going to learn today I'm only using three ingredients, super simple, super easy Don't just start putting all kind of ingredients in there because you can make some really foul smelling and foul tasting stuff

I don't want you guys to do that, aright  So in general I like to use something that's kind of sweet, so today we're using the Asian pears, I like to use something also for a nice good water content, today we're using the cucumbers, you could also use something like the celery or even zucchini, I've used squash before and peel jicama root Then we're going to add in the greens and so we have a ten ounces of baby organic spinach ready to juice  Today we'll be using the Omega VSJ 843 juicer, the Omega VSJ 843 juicer is a second generation vertical single auger juicer This is the kind of juicer I would recommend to you guys if you want to juice a bunch of greens plus a lot of other stuff, overall this style of juicer juices most things, fruits, hard vegetables and leafy greens the best and the two latest versions of the vertical single auger juicer, the second generation, the only two second generation models are the Omega VSJ 843 and the Slow Star juicer

So I'd encourage you guys to get one of those if you don't have one already, they will definitely save you time when you are juicing  So there's a few reasons why I like the Omega VSJ 843 juicers as well as the Slow Star juicer because they run at a low rpm The VSJ 843 runs at 43 revolutions per minute which is really slow compared to a Breville Juice Fountain that runs in excess of 10,000 rpms which is really fast This causes oxidation to the beneficial phytonutrients in the juice based on scientific studies which I have seen, which is going to reduce the amounts of benefits, for example anti-cancer benefits from the juice from studies I've seen, once again  The main thing is you want to get a juicer and start juicer

Most Americans are doing far worse in their diet than juicing and juicing would be a major improvement I mean, most Americans do not simply eat enough fruits and vegetables Most of the vegetables that Americans eat are potatoes in the form of French Fries and potato chips and tomatoes in the form of ketchup So I really want to get you guys to eat, especially the leafy green that's what I'm focusing on today We got ten ounces here, but we got, although that's a lot of lettuce we got a lot of other things to balance it out so it's going to taste good

So I always want to encourage you guys to make like a green juice for breakfast One of my girlfriend's favorite green juices is like a spinach and pineapple Lately she's been actually doing like some greens and some cantaloupe or something like that Now, I like to generally stick to like apples and pears and Asian pears or some citrus or some pineapple in with my leafy greens, but feel to make anything you want, but remember this, keep the recipe simple Use only a handful of ingredients at the most and try to keep it down to like two or three like pineapple and spinach– amazing! You don't even need to add cucumbers or anything else, right

So yeah, if you do want do something, do like three ingredients and you're going to be far less likely to screw something up and make something that tastes bad Of course, like if you're juicing dandelions, pears and cucumbers, dandelions have a strong flavor, so you're going to want to use just a little dandelion and a whole bunch of the other stuff, right So spinach is kind of mild to me and everybody's taste buds are different I've been doing this for twenty years now, so I'm really used to all the different flavors and greens that I'm growing in my garden  So without further ado let's go ahead and get into juicing in the Omega VSJ

Now the most important thing to remember in any vertical slow juicer is to rotate the produce you're putting in We're going to go ahead and put in some spinach, some cut up cucumbers, some cut up Asian pear then repeat, spinach, cucumber, Asian pear until we're done So I guess let's get juicing  Alright, so we're about half way done juicing in the VSJ and every once in a while I like to shake down the pulp bin and this has caught a lot of pulp so I like to basically just run that back through Mostly it looks like it's mostly foam, and there's not a lot of pulp in there

Then once we've put that back in there then I like to use something watery to kind of like push it in So we're going to go ahead and use a cucumber to get that all to go through I'm going to go ahead and continue juicing the rest of my delicious green juice today Alright, so I'm just about done juicing in the Omega VSJ 843 I ran out of my greens first and that's good because you always want to run out of your greens first

Next we're going to go ahead and put in the final Asian pear and cucumber, our collection cup is getting a little bit full here Maybe we're going to go ahead and turn this off before we overflow We'll shut down the stopper and I like to basically put the sieve on the top there We'll move the bowl aside Here's my delicious green juice this morning made in the Omega VSJ 843

Alright, nothing better than a pitcher of beer to start off, I mean fresh green juice to start off your day with Wow, that's really light and refreshing It tastes like, it's really watery due to all the cucumber, the Asian pear imparts like a light sweetness and then we got the greens in there of course which are really beneficial and good for us because simply not enough Americans are eating enough leafy greens I mean, this is how easy it is to make a juice, it doesn't take that much time and even if you're really busy I want to encourage you guys to make the time to juice You are worth it

The more you could juice and eat more fresh fruits and vegetables, the more it'll improve the quality of your life, the more it'll improve the energy you have in the life, the more it'll improve your life span in my opinion and the healthier you're going to be because of it So it's definitely one of the best investments in time you can make instead of trying to go to your job for money that you may not need, to buy things you don't need, and all this kind of stuff So we got to remember what's important and in my opinion your health should be your greatest wealth  If you guys enjoyed this episode, please give me a thumbs up, let me know, also be sure to support me and my work by making your juicer purchase at discountjuicerscom

That's how I am able to make these educational videos online for you guys Also be sure to click that subscribe button right down below to be notified of my new and upcoming episodes I have episodes coming out about every five/six days or so on comparing different juicers, making juice recipes, all this kind of stuff Be sure to check my past episodes I have over 400 episodes now on all aspects of juicers, comparing juicers, and pretty much almost anything you'd want to know about juicers Once again, my name is John Kohler with discountjuicers

com Be sure to visit dicountjuicerscom/youtube for special promotional offers for our YouTube visitors  Recently on Discount Juicers Alright! This is John Kohler with discountjuicerscom Today we have another exciting episode for you and what we're going to do in the video today is we're going to compare the all new Omega TWN 30S and it's over on this side with the Omega NC 800, so the Omega NC 800 has been