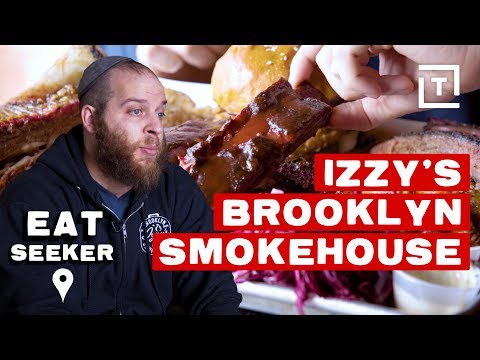 – [Izzy] We heard that there was gonna be a kosher barbecue pop-up, which is unheard of in the kosher market I took my wife and I to go see it, to go there, we probably spent like, 300 bucks that day on food

The smell of the wood, the fire, the brisket Ever since that time, it's almost like my life changed in a way Like, I was so obsessed with wood-fire cooking What made me obsessed with brisket is that, we're kosher, the first thing that I attached myself to in barbecue is obviously, is beef, not pork What's the king of all the meats, is the brisket

And knowing that brisket is — it's a hard, tough cut of meat, because you have the two cuts: you have the first and the second cut One is this nice, you know, intramuscular piece of fat, and one is that lean piece And to get them to cook harmoniously together is a really tough thing to do And when you get it right, there really is no better feeling than nailing a brisket I tried cooking barbecue from my gas grill at the time

I'm all excited, I got a nice trim brisket, and lo and behold, once, after four hours, the brisket was so awful, it wasn't edible I went ahead and bought myself a smoker, and I started reading more on forums, and I started doing briskets every Sunday from home, just as a pure hobby My first brisket I smoked, at 2, 3, in the morning, I hear like sirens, I see three firetrucks coming down my parents' block They walk into my backyard, they look at the smoker like, "Check 1, 2, guy's smokin' a brisket, we're good, we're good" And that was almost my first introduction to smoking here in the city

But then I said, "You know what? I'm the type of guy that when I do something, I really wanna do it right I don't know anything about the food industry, but I wanna be the first brick-and-mortar kosher barbecue restaurant in New York" (sizzling) We're not tied to any really tradition: My grandfather was never in barbecue, my father was never in barbecue Our rub, it's sort of a central Texan, but not really, 'cause central Texas barbecue requires like a 50-50 salt-to-pepper We use salt, pepper, a little bit of Spanish paprika, and that's it

The takeaway I was looking for when I was going to these places was really inspiration, you know, seeing, the camaraderie and seeing everyone the same on the line over there and just you know, coming together for this amazing food, was a tremendous experience for me And then when I finally actually got to eat Texas barbecue for the first time, that was a surreal experience Brisket is the king of all the meats, and just that purism of you know, beef, salt, pepper, the main thing is the beef, not the sauces, not that other stuff on the side, and just the purity of central Texas really drew me to it (sizzling) Milk and meat cannot be mixed That's actually margarine we use, because you can't use milk and meat

Why? That's just the law Also, after you eat meat, you have to wait six hours if you wanna eat dairy after that, because they say that it takes six hours for meat to fully digest People have a misconception, they think that you could just take any piece of meat or pork and give it a blessing, and it's kosher Unfortunately, that's not the way it works What kosher meat means is that, generally, there's someone inspecting the animal, making sure there are no sicknesses, there's no injuries

We have the highest level of kosher We only use the front quarter, the hind quarter we sell to the non-kosher part of the factory To source kosher meat is pretty hard, because there's only, you know, X amount of vendors out there in the industry You don't have that many you know, like Angus farms to choose from And on top of that, a steer only has two briskets

We only use the front half of the cow so you know, we have to figure out what to do with the hind quarter as well Kosher meat is way more expensive because just the process to get it kosher There are so many more hoops and bounds that we're paying probably double or even more than non-kosher meat What barbecue I feel like is bringing to the Jewish community and to every community in general, is that, 'til now, in kosher, recently over the past few years it was either fine dining or regular fast-food places And barbecue is almost that food, which is you know, this really high-quality beef, but it's a simple food, so you know, back in the slavery times, was a throwaway cut to the slaves, and they used all the tough cuts of meat

But now, those tough cuts are considered the most prized cuts Seeing whether it's Jewish people here, or non-Jewish people, kinds of people eating barbecue together, I feel like that's really cool and something I really appreciate