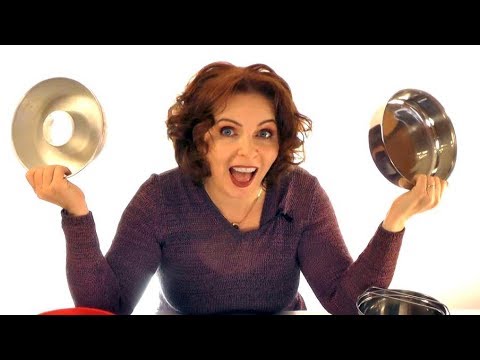 Hi I'm Laura Pazzaglia founder of Hip Cooking and today we're all about sweets! We're going to make a Mascarpone Chocolate Chip Cheesecake and a super easy Lava Mud Cake using the Instant Pot But first, we're going to discuss what containers to cook those desserts in, how their size and shape affects their cooking time, and I'm going give you the lowdown on how baking powder reacts under pressure

Welcome to Pressure Cooking School! Okay, here's my hyphenated list of what's suitable to use in the pressure cooker- oven-safe any container that is safe to go in the oven can resist the temperatures in the pressure cooker food-grade a glass flower vase for example is not food-safe or food-grade as the glass might contain lead so the container needs to be made of food grade materials non-hermetic any container that fully seals like a flanera, a Tiffin box, a camping container, or a pudding mold should not be used in the pressure cooker *sealed* that's because a hermetically sealed container will build pressure, too, but it lacks the valves or safety vents to let you safely release it Here's a portion of the heat-proof containers which I repurposed in my kitchen Actually one was specifically made for the pressure cooker and see if you can guess which one it is This one was actually a storage box for the refrigerator It's the kind that comes with a plastic lid – got rid of the plastic lid and I use this This one is actually an Indian Tiffin box It's hermetically seals so I don't use the lid in the pressure cooker

You've actually probably seen recipes where I use it this way It's actually really handy because this particular one already has a handle! I always used to get steamed cakes with a soggy center so I solved that problem with this aluminum bundt pan, bundt OMG BUNDT PAN This is a mini cheesecake pan it's actually one of many I tried using in the pressure cooker in different ways These spring-form pans and push pans

You don't need them I'm not a big fan of silicone It's slow to cook and it retains flavors from previous recipes as well as the flavor of the cooking [dish-washing] detergent so I don't recommend them BUT they're actually great for making cheesecakes and I'll explain and show you why during the recipe This is a ceramic bowl and it's actually the perfect shape to make bread pudding Speaking of ceramic even a mug will do! So

did you notice how many materials can be used in the pressure cooker? Unfortunately, each one has its own quirks – each material has its own "heat transfer rate" In our case this means how long it takes for the steam in the pressure cooker to heat up the container to cook the food or dessert The higher the transfer rate, the faster the heat is delivered to the batter and the faster the dessert is made

The three ingredient flan from my cookbook actually takes TWICE as long to pressure cook in a silicone ramekin than a ramekin made of any other material That's because silicone actually insulates the contents from heat Glass and ceramic are slow to heat up but they're also slow to cool down – these containers continue cooking the contents even after they're out of the pressure cooker Stainless steel heats faster but it also cools down quickly And, aluminum containers transfer the most heat to the food but they're delicate and can react with acidic foods

Since they're easy to find and perform the best, I mostly make my desserts with stainless steel and ceramic accessories BUT the material of the container is not the only thing that affects the pressure cooking time of desserts The shape of the container matters, too! Just like any other food under pressure the food is cooked from the outside in So the further that heat has to travel the longer it will take to cook for desserts In particular, I consider them done under pressure once raising agent is activated and the eggs have set

And, speaking of raising agents let's talk about baking powder, now! To illustrate how baking powder behaves in the pressure cooker, we need three cooks to bake a cake One lives at sea level the other at a high-altitude location and the last one in a low-altitude location We'll get to them in a second If all three chefs follow the same cake recipe the chef at sea level will get a perfect cake, the high-altitude chef's cake is going to over expand and the low-altitude chefs cake will remain a solid disc That's because the atmospheric pressure is different for each location

As the altitude rises the pressure decreases and as the altitude lowers the pressure increases And just in case you haven't already guessed the low altitude chef represents the high pressure conditions inside a pressure cooker! High altitude cooks already know that they need to decrease the amount of baking powder in a dessert recipe to get the same result as a cook at sea level

That's because there's less resistance for the cake to rise so following this logic and testing pressure cooker desserts over and over and over and over I found that giving baking powder a boost by increasing it for desserts cooked under pressure will turn that solid rubbery brick of a cake batter into a fluffy, spongy dessert You're going to see this in action in the lava cake later in this episode but first let's get to the cheesecake! Let's start the cheesecake with the crust

Add the cookies for the crust in a ziplock bag and zip almost completely and then bash Oh by the way, while I was bashing the cookies I was letting my toaster oven melt the butter right in the mixing bowl Mix everything together and set aside

Since the silicone mold is flexible, put it directly on the steamer rack or on a plate Tuck the mold in the freezer to harden the cookie crust while working on the filling I prefer making uncomplicated desserts and this one is no exception It only needs a fork! No beaters, blenders whippers, or mixers I start most of my desserts with eggs and sugar

I'm taking advantage of the pointy ends of the sugar granules to break up the eggs more quickly Apologies for the unaesthetic bruises on my arm It's from my karate class! Click on the recipe to read more about how my classmate inspired this cheesecake recipe!! Add a couple of large pinch bowls of starch to the chocolate chips This keeps them from sinking to the bottom of the cheesecake mix in half of the cornstarch covered chocolate chips into the batter Do you see how the batter completely seals in the cookie crust? That's how the crust can remain crunchy

No crevices, joints or openings for the steam to enter in the pressure cooker base Add water and just before pressure cooking the Cheesecake sprinkle the rest of the chips on top leaving the cake uncovered ensures that it cooks evenly all the way to the center Some condensation will have gathered on the top of the Cheesecake – especially for this kind of cheesecake with a non frisbee-like undulating surface Simply use a paper towel to blot this liquid away and let the cake rest before refrigerating or freezing Alright, it's the next day, now and it's time to unmold this cake Now that the cake has cooled completely and has been chilled the custard has finally begun to pull away from the sides

Time to flip it over and gently work off the silicone mold If you're using a stainless steel or aluminum container gently spank the base of the container to encourage the Cheesecake to come out OK, I'm about to tell you that everything you've heard about pressure cooking cheesecakes is wrong! Don't use a spring-form or a push-pan even silicone ones go solid silicone container, instead That's because the steam of the pressure cooker will enter all the little crevices in a push-pan and spring-form pan to give you a soggy cookie crust While, using a solid container the Cheesecake batter will seal the cookie crust underneath the batter until the cake is finished cooking and starts cooling

And the silicone makes it easy to un-mold the cake, too! Don't cover-up the Cheesecake but beware when removing the lid Covering the Cheesecake in foil during cooking will only prevent the steam from reaching the top of the cake and cooking it Pressure cook the Cheesecake uncovered and then be aware while removing the lid that the condensation might dribble from the lid on the top of the cake; but, no big deal just blot it off with a paper towel! Don't rush to open the pressure cooker use only "natural release" not only does the Cheesecake continue cooking during the release time, but well Remember the lesson where I showed you what happens inside the pressure cooker when using a "normal" or "quick" release? Well that's gonna happen to your Cheesecake if you rush it The egg batter will boil violently and scramble the cake! And, lastly, experiment use your own cheesecake recipe but follow my technique for no-fail results here we go again with the sugar and egg this recipe is based on the popular microwave mug cakes but with a little more baking powder, of course

We can achieve a runny, lava center precisely because of *how* the pressure cooker heats the mug -from the outside in Oil the mug – oops I did this off-camera! Fill the Instant Pot base with water, and add a rack or steamer basket to hold up the mug If you want to make this recipe with two or even three mugs the pressure cooking time doesn't change