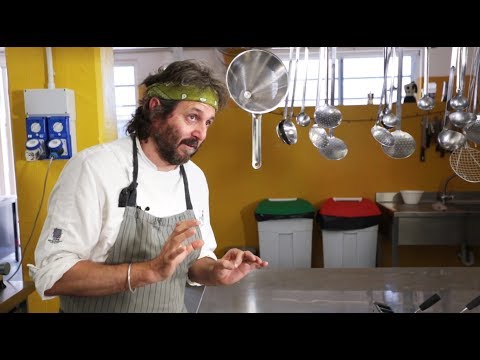 Hi, I'm Cristiano Tomei We're in Lucca in one of my restaurants, Satura

Today we're travelling through five cookings in the world of pasta I'm now making a pasta that is a soup, as well It's a game with pasta and fish, really simple I unfortunately have a problem: I don't give names to my dishes, I only offer them to be eaten Be patient, thank you

So, add a 60% of broth, we already added it, and a 40% of oil Then we're placing it on the flame The broth is very savory, so let's add a little bit of salt, just what is needed When it starts boiling we're taking ditali rigati and make this very technical gesture: throwing it in the mix! The pasta is now cooking, so it contacts oil as it cooks and absorbs broth and its flavor so it already seasons with oil We made a pesto before, a green sauce using lesser calamint, yarrow, wood sorrel when we can, simply beaten with extra virgin olive oil

We're leaving it aside In the meantime, here we have knife-minced shrimps, very simple natural, without any further addition, respecting the work of the pasta maker The cooking must be very very short in this case, to give you an idea about the minutes, it's about 3 minutes 3 minutes and a half So, we're taking it The good thing is to strain it and you can see that the pasta is already seasoned as it's shiny

Can you see? Now the mixture stands and the oil rises again on surface Then, let's take a spoon and use our hands Then, let's add the fish and place it in the middle, without seasoning it as it's not necessary, it's very savory on its own Let's take the oil on the surface Here I really enjoy it, it's some sort of culinary orgasm: grated lemon peel to give it that acid hint Then

Bye! I'm adding the sauce in here It's a particular sauce: it's a plain pasta, after all This mush here is fermented bread Sometimes cuisine throws you lots pleasant surprises! I left our handmade bread to ferment with a bit of water, I left it under the sun and the fermentation started As I tasted it, I had an epiphany! The incredible thing in this fermented bread is that it has a marked acidity, but contains iodine: it tastes like sea

So, the bread and meanwhile our spaghetti is cooking there Here are scampi, excellent ones, from Viareggio I'm coarsely mincing them, in a casual way Using the carapace of the scampi – as scampi are so expensive – we created an oil We need very very few oil

Then I'm adding something that would be prohibited, but we aren't telling anyone: these are strawflowers, growing on the dunes by the sea, in my city We're crumbling it with the hands and we're stirring the mixture well Spaghetti are done in about 7/8 minutes We're taking a drizzle of cooking water So, our beautiful spaghetti we're mixing them with the sauce, adding cooking water if the sauce is too thick

There's such an incredible fragrance here! Spaghetti, clearly, must be al dente, mostly if it's worked so well, meaning it's not worked too much We're finishing the dish without drizzles of oil or anything, as bread already seasoned our pasta abundantly Clearly, we'd like to taste the flavor of pasta, right? We're crumbling some more strawflowers and the dish is done, simply done! We're now making a very important pasta to me and to the whole humanity: pasta with butter! Classic technique: in abundant salted water, refining it with a very simple technique, even though it's very effective We're using this great pasta shape: sedani, small macaroni they have plenty of names

We're throwing this pasta in abundant salted water, as well We're not doing anything particular Hey! This pasta is alive! It will be done in 8 minutes, again We're taking the cooking water, rich in starch then we're taking the butter, cold because you can see that it already melts Then some sage: caress and throw in the pan, casually

Water is emulsifying with the butter and starts creating this excellent foam! The flame is high, we're straining the pasta and throwing it in the emulsion I'm not making a risotto with the pasta, as pasta is cooked in the water, not in the sauce If so, we shouldn't be calling it pasta, but rice The three ingredients, meaning butter, sage and pasta are thickening together and it's great, it's really something Now we're taking a lemon and cutting it

It's a very complicated gesture, even without a cutting board! We're adding some lemon juice, juice as it opens the pasta Wow! The fragrance is now entirely different Everybody at the table, we're ready! It's so nice! Here it is Pasta with butter! Always enjoy pasta, as it is: a very noble ingredient, unique in the whole world We're now making a homage to our times: recycling is popular, so we're using the remainings from bags and boxes of pasta This is broken pasta and this is blended broken pasta We're taking it dry and blending the remainings of pasta, pasta waste This semolina has an important feature: it tastes like pasta

Such a sad dish like semolina, when declined with an excellent quality product can become something incredible The famous isinglass: we're pouring it in the pot Here it is, very thick We're making it boil In the meantime, we're doing sometihing important: taste the salt

It's very savory, intense We're adding salt as soon as it starts boiling, just a bit This thing, so misteriously transparent, is nothing but gin! Juniper also grows near the sea When we're using a good gin, we can smell the fragrance of Mediterranean scrub, a nice aroma We're using it together with these, These are cuttlefish tentacles

It stays between us, but the tentacle is the most flavored part of cuttlefish, together with the insides, and we're now marinating them directly in the gin We're throwing the semolina and look at this magic: the mush is created right away It really tastes like pasta! We're taking this "pasta mush", the tentacles I'm sorry I'm not using any tweezers but I like the hands Then, here we have the leaves of a herb I love: lesser calamint, that reminds of olive groves and of the scent of everything that exists between the olive grove and the wood, meaning mushrooms, as well

The dish is done and I can guarantee, that this is a wonderful travel among consistencies from the soft to the crisper of the cuttlefish, even if it is a crisp softness in the end The real thing, most of all, is the paradox: we're eating a mush that tastes like pasta with fish Let's now see if I make it alive, even out of overcooked pasta I'm trying this nice game It's difficult, but in my opinion it's worth it

This is overcooked pasta, blended, without liquids This dough is obtained by overcooking pasta, over the cooking point, straining it from the cooking water and blending it without liquids to obtain this kind of mass A modeling clay The hot pocket should have a sauce that melts inside, so meanwhile the oil is at the right temperature I'm squeezing the mozzarella a bit and Fabio is spreading the dough, in the meantime

This is a bit more complicated phase You can also work on a counter with flour Anyway, the mozzarella Fabio, there you go Have fun! The filling is really simple: tomato, mozzarella

The tomato sauce is the most classic possible, without extreme cookings Anchovy fillet and a basil leaf Then, a trick: let's wet the hands with extra virgin olive oil to prevent pasta from sticking on the fingers Then, we're closing it like a big raviolo A bit of patience is needed in order to stick it without breaking it

When it's ready, you can let it stand a bit then, if the dough cracks a little, it's not a problem A secret I didn't reveal is that the pasta is overcooked in a water flavored with abundant pepper, so it's a pasta all'arrabbiata overcooked The water is obviously abundant and salted So, this mass of overcooked pasta already has a flavor on its own We're throwing it in oil

Not like discus throw, carefully We used peanut oil, as I want a neutral oil to preserve the taste of pasta It's nice how the pasta is already browning and it's already crisp on the outside It's doesn't open because as with the heat, the pores and the little cracks close up Now, as we are done with the cooking, the most interesting part is to notice how uniform the browning is on the outside, but inside the pasta keeps this color and flavor

This one is done as well Take a look at our hot pockets! Wonderful! We're now taking the basil and breaking with our hands, of course, throwing it on top I'm saying hello and I tricked you again! Ciao!