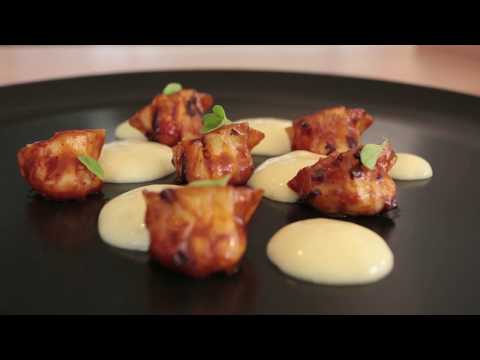 Good morning everybody! I'm Daniele Usai, from the restaurant "Il Tino" here in Fiumicino Today I'm showing you how to make "dim sum", a traditional dish from China, a dumpling made with water and various flours

Today we're making them with local freshly caught tuna, so tuna meat is raw, seasoned as if it was pork 'nduja Our "dim sum" will be prepared in two cookings: we're using the pan, so we'll toast them, or steamed, using the steam oven The ingredients to make "dim sum" for today's recipe: the filling will be done with longfin tuna, red pepper chili pepper flavored oil, fennel seeds and salt, while the dough will be done with tapioca flour, wheat starch and water, a tablespoon of extra virgin olive oil There are two other elements that will be part of the dish: smoked potatoes foam and red pepper icing Longfin tuna, as it's not a – let's say – noble fish, but it's really tasty and locally caught, it is not transported all around the world

I'm just beating it with the knife as if it was a steak tartare, so it has to be quite finely minced and we're adding it inside the dim sum, raw Obviously, for this cut if you're doing it at home, you don't have to be necessarily precise The pieces don't have to be cut so homogeneously, instead, the advantage is to have also bigger pieces, so to be able to chew them in the mouth If you're doing this at home, please don't use machines Once the tuna is minced, let's proceed with the pepper

Let's take a nice red pepper filet and, obvioulsly, remove the veins and seeds, then we're cutting it in the same way, more or less, as for the tuna, so it has to be very fine I personally love it, when eating dim sum and taste the tuna, to suddenly chew the pepper cube, creating aromatic peaks in the dish Salt, obviously, fennel seeds, not excessively And the last ingredient: pepper flavored oil This oil is made with an infusion of 3 well ripe Trinidad Scorpion peppers, a liter of extra virgin olive oil, heating it all at 50°C

It's very important to taste the filling If it is too spicy, don't worry: when heating the dim, we're removing some spicy I'm tasting it, then This is ok! I'm adding it all in a sac-à-poche, meaning a typical pastry bag, mine is transparent, disposable So, we put the filling in and we're proceeding with the dough

I'm just mixing the two flours together – they don't produce clumps at all – a drizzle of extra virgin olive oil, just a bit, then the water The peculiarity of this dough is that the added water must be boiling Now, in a bowl, we can heat it in the microwave, easily Ok, then The water is boiling after we heated it well

We can now pour it slowly in the flours and oil bowl We're first mixing it with the spoon, as the water is boiling and you can burn yourself Once we mixed all the flour, we can continue kneading with the hands It's a very easy dough to work: it's not hard You have to knead it until it's nicely smooth

I chose this recipe because, apart from the "tuna 'nduja" I'm adding, it's possible to fill them with anything: vegetables, cheese, fish This type of dough is perfect for blast chilling: once you make your dim sum, you can blast chill them and store them in a vacuum-sealed bag and a freezer at – 18°C With a knife, we can cut dough slices Try to cover and store in a warm place the remaining dough, as it doesn't tear apart until it's warm When it becomes cold, it's hard to spread

Let's always be careful when spreading It's nice, in dim sum, that the filling inside is visible, transparent Let's dispose it comfortably and use a food ring mold to shape discs, all of the same size The remaining dough isn't workable Be careful in optimizing the cut, as once the borders are discarded, you can't use them anymore

Let's now put our dim together: let's cut the sac-à-poche and start adding the filling Be careful and add the same quantity of filling inside every dim, obviously The filling should be placed in the center of the disc – the sac-à-poche helps us in this task, as it allows us to be quite precise This procedure, once the dough is spread, should be quite quick Let's close them

So, let's take it in the hand and start closing, in this way I'm giving a first pinch, then I'm overlapping and making foldings with the right hand until the dumpling automatically closes It strangely looks like closing the Sardinian "Culurgiones", it's similar to Italian egg pasta, it's subjected to airstreams when spread, so close the windows and work them as quick as possible One, two, three, four five, six and seven We obtained this half-moon We're placing them in the blast chiller, using a small tray if some of them breaks, it can happen: discard them, obviously I like to eat them raw! So, blast chiller, and we're placing them inside

For such a small dumpling, a few minutes are enough The dim sum we placed in the blast chiller before are done As you can see, they're blast chilled already The pan is very hot I'm adding a drizzle of extra virgin olive oil, and we can now add the dim, that I'm reminding you, are frozen already

You need extra virgin olive oil, as I want them well browned in the lower part, so I want them to be lightly toasted The flame has to be very high I'm browning them a bit to create this crust that gives taste I'm adding the pepper icing, nothing but a reduction of pepper juice and a classic meat base We're also adding water along with the pepper sauce, then cover it immediately

So, the steam that creates will help us cooking the dim The icing reduced and sticked around dim covering them I can now start dishing them up The filling inside cooked as well, so, as we said, we have the pepper icing that is very aromatic, inside there's the tuna 'nduja that is very spicy – I'm trying to place them orderly We can add the smoked potatoes foam

We made this very simply: we cooked the potatoes by covering them with milk, we added a 20% of cream, then blended it all, sieved and seasoned with salt and pepper, then put in the siphon under pressure To finish the dish, some fresh oregano leaves The herbs on the dish are never solely decorative: I'm using very small leaves as I want them to be eaten at every bite The dish is done, here it is! Now we're cooking it in the other way, using the steam oven The steam oven is pulling, I'm putting the dim out of the blast chiller once again, here they are

I'm placing them in a small tray for the steam oven, with a wax paper beneath The oven is already at 100°C Such a small dumpling needs at most one minute cooking We're starting from a temperature of – 18°C, so these dim are frozen I'm placing them in

I'm counting a minute, in the meantime I can spray the foam on the plate In this case, we're dishing them up in the center Not too much of it The minute cooking is over I'm brushing the icing on top, in this way

The difference is that there's no crust here, it doesn't burn Let's now place the dim on the potato foam More or less, comparing with the dish before, the composition is different but it's important to respect proportions: the quantity of foam and oregano compared with the dough Some oregano leaves, here and there, and the dish is done Here's the second version of dim sum, here's the steam oven one and here's the one toasted in the pan, crisp

In both cases, this is in my opinion a delicious dish and I'd be glad if you try it at home! I'm done for today bye everybody!