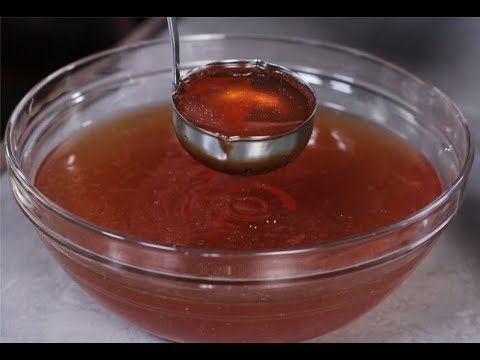 The single greatest ingredient you can ever make in your kitchen is perfect chicken stock Stock that sits in a pot like that no muss, no fuss and when it emerges 36 hours later, golden consomme

You want to know how to do it? Stick around! I'm not sure that there's a cook, or a chef worth the apron they put on that doesn't use homemade stocks I have some water here in my slow cooker this is one of my favorites You can go to your temperature setting and using these arrows you can punch up and down and you can actually set it to a specific temperature We just load our ingredient,s and put the lid on, and set it aside for 24 hours Bay leaf, couple of cloves, I have three, believe it or not you can taste the difference, two teaspoons or so of black peppercorns, two garlic cloves, some onion, some carrot, some celery, some parsley, give it a little tear with your hand

Leeks, I love leeks my favorite allium Next thing that we want to do, these are carcasses, you've heard me say it a thousand times on AZ Cooks, save your carcasses for when you're breaking down whole chickens I just roasted these in the oven If you're using one of these cookers, chop you're bones you are gonna have more room in there We're gonna also add some raw frames, got some dark quarters and drumettes, I've got a whole bunch of wingtips that I'm gonna throw in there

I like using those here because they're smaller they have lots of flavor and lots of fat So I'm using a combination of old chicken carcasses, that I defrosted it roasted in the oven, and fresh chicken carcasses from chickens that I've recently trimmed Alright so now that this is loaded up I'm just gonna fill it with cold water Lid, I always sort of peek this out, and I'll keep topping it off with water because I want to make as much stock as I can After about six or eight hours at 200 degrees, those bones are gonna start to collapse and get soft but what I want to do, is make sure to push those bones down we set it, now we forget it but put a post-it note and make sure you remember it

36 hours later, nothing like the smell of beautiful roasty chicken stock Because it never boiled, it was just held at 200 degrees for 36 hours, it was like steeping chicken tea And I just moved this aside, it's clear Now we're basically going to pour consomme right out of here And very slowly, look at how clear that stock is, that's pouring out of there

The minute you pour it, it's gonna cloud up ever so slightly, because it's the first time that the fat which rises to the top, is actually mixed with the broth But when was the last time you made a stock that rich? You can use this to make soups, and stews that have real incredible flavor to it The poultry aroma on there is insane, all the impurities are out And we have this gorgeous golden elixir This is going to change your food game in your kitchen