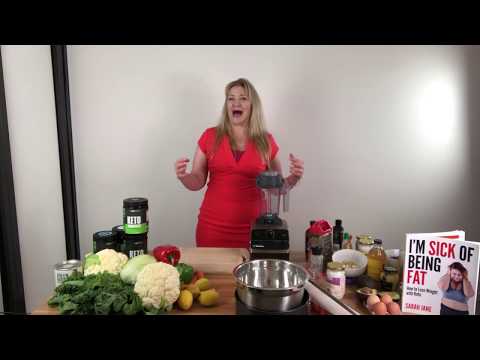 (light music) – Hello my friends, welcome to Keto With Sarah Jane My name is Sarah Jane, and if you haven't seen me or any of my other videos before, make sure you click on that subscribe button

So in today's video I want to share a few of my favorite recipes So I've been a chef for about 14 years before I started to study nutrition and started to really specialize in the keto diet So as you know the keto diet has only 10 percent carbohydrates, and those carbohydrates typically come from vegetables and some of the fruits So we tend to stay away from the starchy carbohydrates and your sugar and your processed foods Now a lot of people when they hear about the ketogenic diet, and the low carbohydrates, get very stressed, because a lot of their favorite foods are the carbohydrate style

So typically that's your breads, and your cereals, your pastas, and mainly pizza So this is one of the recipes that we're going to teach you today, is how to make a keto friendly pizza So we're going to start off with the base So we're going to create the base first, to cook that, and then we'll put the toppings on Now of course we're not going to be using any flour, so it's based on using cauliflower

So cauliflower of course is one of the cruciferous vegetables, which contains high quantities of phytonutrients So phytonutrients are anti-carcinogenic So these help to fight diseases in your body, it helps to rid your body of toxins, and at the same time giving you vitamin A, vitamin C, vitamin K, and all of the minerals that your body really loves So let's start off with the cauliflower So I'm going to take one fresh, whole cauliflower and we're just going to remove the head

Now, what you can do if you've got a food processor you can put this straight into your food processor and blend that, if you don't have one of those, then just your everyday grater will do the exact same thing So I'm just going to put this into my blender here So I probably won't get all of that in there, but I'll just try sections at a time Okay Okay so this nicely blended up now, so we're just going to place this into a mixing bowl

Okay so now what we're going to add is some seasoning So some pink Himalayan salt for those added benefits of the trace minerals So I put a grinding of salt I like to use cayenne pepper So cayenne pepper gives it that nice warmth, and it also gives you the added fat burning benefits

So a little bit of cayenne pepper And then what we need is one egg So one egg into the mix Then we're going to mix all this together Then you'll have your mix, like so, and what we're going to add is some cheese to give it that pizza flavor

So try to get yourself some fresh mozzarella and grate this up by hand Alright So, we're just going to use roughly about half for the base, and then we're going to use half for the topping So put that into your mix Take your mix and blend in the cheese with the rest of the cauliflower

Alright, once that's blended then you can start to prepare your base I actually don't have a pizza base, but that's probably the ideal thing that you'll use So I'm just going to use a spring base form I'm also going to use some baking paper that will help you to remove it at the end So that'll go into my base

And then what we'll do is to pour the mix into the base Then we're just going to spread this as thin or as thick as you like And then we're going to place the base into the oven to cook, we're going to put it in for about 20 minutes on 180 degrees Hi, and welcome back to Keto with Sarah Jane So I've just cooked off our pizza base using cauliflower as our main base

So now we're just going to dress it up So you can see we've just got it so it's pretty much dried out, and it's browned on the top, and it's gone nice and crispy just like a pizza base So then we're just going to spread it with a tomato base So try to keep your tomato base as fresh as possible, and when I mean fresh I just mean canned is fine, but what I'm saying is don't use anything that's too high in sugar So a natural tomato puree is what you're really looking for there

The alternative is you can also use pesto as your base So just spread a little bit of tomato paste on the top Then what we're going to do is to add a little bit of mozzarella cheese that we grated earlier on Put that all over on the top And really, it's up to you, get the kids involved, they'll love doing all of this

So what I've done is I've got some bacon already cut up, so some bacon pieces on there I've got some beef, ground beef mince Add that And lots of good capsaicins and fresh vegetables Whatever you've really got lying around, whatever takes your fancy

And I love my cheese, so Little bit more on the top there And I'm just going to finish it off with a good helping of salt, and then it's back into the oven Hi, and welcome back So I've now got a finished pizza all ready to cut up

Just like the real thing Straight out of the oven's quite hot, but Mm Delicious So, try one of these recipes, and keep you on the ketogenic diet