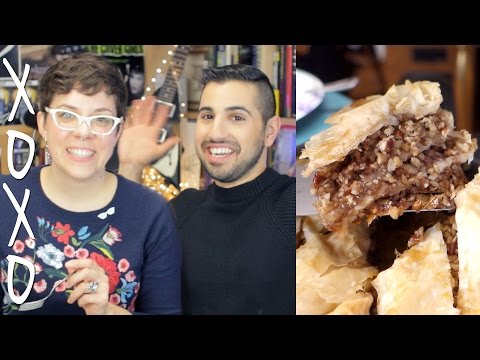 – Today I'm hanging out with a Greek dude and we're gonna make baklava! – I'm excited I've never had a non-Greek teach me how to make something Greek

– And this recipe I got from my friend Hyla Cooking It has the least amount of sugar of all of the other baklava recipes that I have seen A little less sweet – Yes, which is actually better sometimes – Starting out with some phyllo dough

– Phyllo dough! – Phyllo, that's what we say? I say phyllo where I come from – It's phyllo – Okay phyllo dough – Yes – And now we just start assembling this thing

It's kind of like doing lasagna Have you made lasagna before? – Nope So can i just open this? – So just open it up and I have never used phyllo dough – Phyllo – Phyllo dough before but everybody on the internet says you want to use a wet cloth so it doesn't get dried out otherwise it'll dry out

– Oh that's very smart – Yeah, get your brush out And I brought two so we both have one – And I like these These are cute

– I love brushing things on recipes In real life you would put parchment paper down but I totally forgot to bring some and there's none here so we're gonna just hope for the best and put a lot of butter in the bottom so hopefully we can get this thing out of here afterward – And on the sides too – Yup, on the sides too Neither of us have made this before so (laughs) here we go

(laughs) But at least I have a real Greek person – Yes! – That should help – That really does – I'll hold this – Thank you

– Ooh phyllo dough! – All right so now I just, drink it up, you want to be gentle – I think maybe we want to cut the slices in half because our pan is small Will that fit better? – I'm sure it will (laughs) – Wow! – So nice – And it doesn't have to be perfect

A theme on my channel all the time is just like try new things and if it's not perfect, it's totally fine – And then you just kind of put more butter right? – Yeah just more butter So now we fold this part down too – Oh we do? – Yup Once you have the butter because then you put a little more butter on the top of it and then there's butter on all sides

It's kind of like My Big Fat Greek Wedding except there's no wedding and it's sometimes slightly gay – Just slightly? – Just enough to not offend anyone (laughs) – We'll put a link right here so you guys can subscribe – Yeah please – Next layer! – Yes ma'am! So how many layers do we put before we put any nuts? – We want eight layers before we do any nuts

So this takes a while How many did we just do? Four, six? – Eight – Let's start, let's put some nuts in – Oh that smells good – Just smells like nuts

– No and sugar! – That's true You smell the cinnamon sugar too – you do – We want about a third of this which is actually kind of a lot I think my pan may be a little smaller than I thought

– Question, what's the honey for? – The honey is another layer that we're gonna have to do once this is in the oven to just do a little glaze – I think it needs more nuts – You think so? Okay I'm gonna catch you in my hand – There you go for it It's okay, I saw her wash it

(laughs) I think, I hope (laughs) – Layer, we need eight more layers before we do the next layer of nuts – So I'm gonna do two of these at a time – Is this actually a Greek recipe? – It's not even technically really Greek as much as it is Mediterranean I'll ask my sister

– Okay – Maybe we should call my sister and ask her – Okay (phone rings) – Hello? – Hello there my little niece How are you doing? – Oh my God, you're so energetic

– It's confirmed – Yay! (jazzy music) – The final layers You're so good at it now – Oh my God Like I honestly feel like my inner Greek old woman just like coming out, just need one of those like black like things to drape over my head

– And we want to cut it before it goes in the oven because after it'll just be all flaky and messed up so you can't cut it later Now we put it in the oven (jazzy music) Okay let's taste it! – We're back and in case this, I know it looks way different – Yeah now we're downstairs – Oh my God, yay! – Doesn't it look great? – It looks so, yeah! – Mmm! – Mmm! Sometimes you get baklava it's like way too sweet