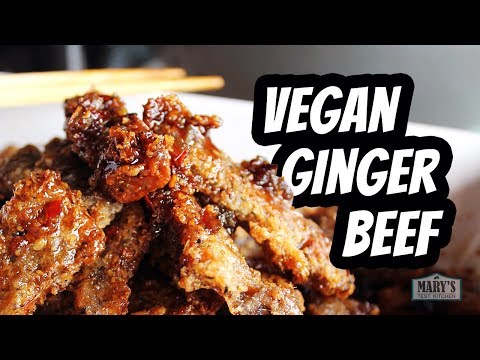 Ginger beef was invented right here in Calgary, Alberta by chef George Wong in the 1970's for the local palate It's still on practically every Chinese restaurant menu 'round here: strips of meat, well battered and deep fried, and lightly coated with a sweet and sour sauce that is much more sweet than sour, with aromatic garlic and, of course, ginger Plus dried red chilies to add heat After numerous requests for vegetarian ginger beef, especially from my fellow Calgarians, and after *so* much testing, I'm happy to bring you this vegan version which uses seitan in a batter that stays crisp and crunchy even after being nicely coated in that same syrupy ginger beef sauce It's best to start this a day ahead because our vegan protein needs time to cook and cool down

Luckily, it's a super easy recipe: my good ol' Beefy beefless seitan It's made of wheat Specifically, wheat protein which tastes (surprise, surprise) like wheat so we're going to blend together some flavours to change that To improve the texture, I'm adding beans Kidney beans will give the seitan a reddish brown colour but really, you can use any beans you like

It doesn't have to be super smooth though Now you can mix the wet ingredients with the gluten So you can tell by now, this isn't a gluten-free friendly kind of recipe If you are gluten-free though, you could sub store bought meat alternatives I expect super firm tofu would work in place of the seitan

Maybe soy curls soaked in vegan beef flavoured broth; though I haven't tried those myself Remember, this is your vegan ginger beef and there are no rules Knead this dough a bit, but it doesn't require much The more you knead seitan dough, the tougher your seitan will be at the end So it's really all up to you

Next, we'll steam it You can wrap up the seitan for a denser loaf or just plop this ugly thing on your steamer insert and steam over high heat for an hour to cook it all the way through When it's done, it'll look pretty ugly still And it needs to cool, otherwise it's a pain to slice up If you make this ahead, you can keep it in the fridge for up to three days or have it in the freezer for up to two months

Afterwards, you can slice it up Or rip the pieces by hand This gives the strips a look more like the classic dish, plus raggedy ends make for little crunchy bits which is nice You'll see what I mean later Next, the batter which consists of ground flax seed, cornstarch, and water

If you don't have ground flax, you can also use ground chia seeds; they work in similar ways It looks thin now but wait about five to ten minutes In the meantime, let's prep the rest of the stuff Here's some light soy sauce, white vinegar, lemon juice, but if you don't have it, just use extra vinegar; that's fine, and half a cup of sugar Yes, that's a lot

But it's a sweet kinda sweet and sour Just go with it I'm using brown sugar for a richer flavour but you can also use white which more likely what they use in the restaurants Set that aside, and prep your aromatics Grate some ginger

I'm doing about two teaspoons worth of finely grated ginger And for a wee bit of texture, I'll do another two teaspoons of coarsely grated ginger And squeeze the rest of the straggly ginger for the juice for extra gingeriness I grew up on ginger at almost every meal so this might be too much for some people When in doubt, scale back 'cause you can always add more later

Just know that it will coat the seitan strips and fry up to crispy crispy goodness Add the seitan strips and use clean hands to get everything well coated Finally, we can move on to frying We'll do a shallow fry with a half inch of oil, though you can deep fry if you like I'm using medium high heat so the oil will get hot quickly

When it's very hot but not yet smoking, you can add the seitan Make sure they are nicely coated before going in And of course, be careful Don't splash Lower the strips in slowly

Try not to crowd your pan or wok but you don't have to worry too much about them sticking together You can pull them apart later In under a minute, you should be able to start flipping the pieces with care You want them to be nicely browned before pulling them out and on to a paper towel lined wire rack A rack is nice so there's air circulation Without it, the seitan will sit and steam and your vegan beef may lose some crunch Remember watch the heat and lower it if your oil starts getting too hot and starts to smoke

Here, I added the last of the seitan and didn't break them apart at the start That's fine The trouble with a big clump stuck together is that it can flop around causing splashes and that's not very safe Just use tongs, go slowly, don't rush, and it'll be fine When all your seitan is fried, turn off the heat and you can carefully transfer most of the oil out into a heat-proof container

The safe way is to use a ladle I'm not living dangerously Filming just takes a long time and this oil isn't that hot Leave a couple teaspoons worth in the wok, turn the heat back on to medium high, and you can add the aromatics I recommend adding sesame seeds too at this point

But I completely spaced on the sesame seeds when it came time to film They are optional but the sesame flavour really bumps this dish to the next level Stir-fry for about a minute Just until everything is fragrant but be careful not to burn your chilies or sesame seeds Stir the sauce mix well, then add that

Turn the heat up and let that boil for 2 or 3 minutes Pretty quickly, it'll reduce and get a syrupy quality You can test it on a spoon but make sure you let that bit cool before you taste it Then you can arrange your seitan on a serving plate and pour the steaming ginger sauce over top Toss a bit

And there you have it Sweet, sticky, aromatic gingery vegan ginger beef Ready to go on rice with vegetables or directly into your mouth It's crunchy on the outside Tender on the inside

And the sauce is flipping delectable You'll want to eat this right away Super good fresh Don't get me wrong; it's still good later But if you have leftovers, you can box them up after they've cooled

Leave a little space for air circulation And you can store them in the fridge for a couple days To reheat, pop them in the oven at 425°F, spread out on a baking sheet, or in your air fryer to make them a bit crispy Otherwise, if you heat them in the microwave, they're not going to be very crunchy But they'll still taste good

And that's it I really hope you enjoyed this video and try out this veggie ginger beef Share it with anyone who misses ginger beef and give this video a like so YouTube will recommend it to more people As always, let me know what other favourites you'd like me to veganize with the hashtag #reciperequest and you might just see it Also, let me know if you have any questions and I'll do my best to answer

Thanks so much for watching, my friends! Bye for now