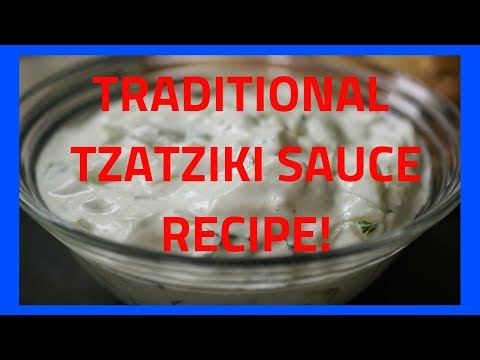 Hello everyone, I'm just standing here having a nice chilled glass of wine Hey everybody, I'm glad you are watching us today, we're going to be talking about a Greek staple called Tzatziki Sauce and you've probably had it, it's a dill and cucumber, a lot of people think of it as a dip, but it actually goes with a lot of Greek dishes and meals that we prepare, and it is a very tasty and fairly easy recipe to do

We did an episode a couple of weeks ago on Greek Chicken with feta, which it's been very very popular, so a question came up, how can I make Tzatziki sauce from scratch? I can buy it but a lot of times there's sugar and stuff added to that, so today we're going to talk about how to make that traditional version of Tzatziki sauce and then if you stay with me on the video, toward the way I will be giving away a secret shortcut to making Tzatziki sauce when you need to do it in a hurry and you don't have all the ingredients But before we get into that, I want to thank you for watching today, and hopefully you have subscribed, but if not please do so if you will and hit the little bell to make sure that you get the updates when these recipes are posted Every week we post videos on Cooking with Chris, which are healthy version, tasty, delicious gourmet style dishes so that you can prepare them and enjoy them with a healthier version than you might ordinarily find Now that said we also have health and wellness episodes on the channel every week and we have skin care, which is how I got started in this years and years ago, so be sure and poke around and check out the different playlists because there are a lot of great tips and beauty hacks and health and wellness and fitness and weight loss and we did a series on the Keto diet that's going on right now,so lots to look around and find and enjoy, and again ask questions if you see something, or if you don't see something that you want to know about Just put it in the comments section

I do always read those, and I do always respond So just check out the video description box for the ingredients we're going to go over today, they always include the ingredients, the how to, and the nutritional information in that box And again, questions, comments, feedback, i appreciate it all So let's talk about what you need to have to make traditional Tzatziki sauce Well you need plain yogurt, you can use low fat yogurt or you can use full fat, the kind that's not amended, either one will work

The full fat yogurt, plain, of course, not with fruit or anything in it, just plain yogurt is a heavier yogurt and will create a thicker Tzatziki sauce If you use the lower fat version you can strain the yogurt by putting it in a strainer, a very thin colander/strainer that's like mesh or the holes are very small and it will actually drain some of the moisture out of it You can get a thicker version, or you can use cheesecloth even So you need a cup and a half of plain Greek yogurt, then you're going to need two cucumbers peeled and cut up and then you're going to place those in a food processor and we're going to grind those down to somewhat chunky, you don't want to make mush out of it, so you want some sort of grain left in the cucumber, so slowly process the cucumbers so that they are kind of chunky and then you're also going to take the cucumbers and strain those as well You want to get as much liquid out of the cucumbers

And to that you're going to add a tablespoon or two, if you like garlic, do two of minced garlic Now you can get two cloves and make this yourself or you can buy it already minced and ready to go where you can just place it into the blender and you are going to have to stir this before you blend So you will stir it around, get it kind of mixed up and then you are going to blend it until it is smoothly blended You're still going to have some chunkiness left from the cucumbers in there but that's kind of what you want You don't want it to be just soup, you want it to be a nice thick sauce

So you're going to blend that and you want to taste it and add more lemon juice, more salt, you can add some black pepper, some more garlic to whatever your taste is, but that is traditional Tzatziki sauce That's all there is to it It's fairly easy, it's got some steps and it's very delicious and it's carb free and it just goes on everything, unless it's something sweet It goes with vegetables, it goes with chicken, it's a great great dip or sauce Now I said I was going to share with you a shortcut to Tzatziki sauce

So you've got your dill and you've got your cucumbers and you've got you know your lemon juice and your olive oil If you're in a hurry and have the yogurt on hand, but you don't have the other ingredients a quick shortcut and it's close, it's not quite as good, but it's very very similar, is you can use a half a cup of dill pickle relish You'll need to strain it out, strain the juice out of it but this small jar would be the right amount, and you strain all the juice out of it, press that out, then just put this in the yogurt and guess what? It tastes very very similar, you can do the same thing, you can add a little salt, a little pepper whatever you want to do but it will fly at a party, they won't know,they'll think it's still really good Tzatziki sauce I prefer the traditional method, because it's so tasty and it's kind of fun to make it, you know, put some work into it, so that's the recipe for today, again check the video description box for the ingredients, the how to and the nutritional information and again comments, feedback, I want to hear from you and I really appreciate your taking the time to watch today, we have more great food to come Bon appetit!