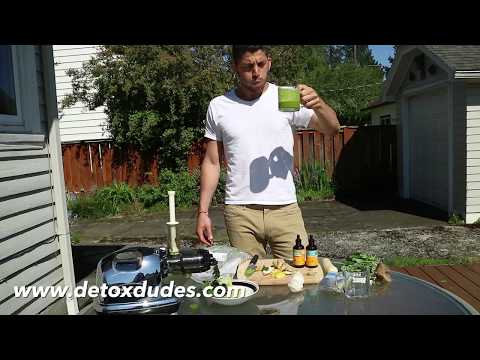 Hello, ladies and gentlemen, The Detox Dudes in the house I want to share with you some juice concoction I’ve been making recently

You know when I first started on this journey I started with juice fasting and juicing and I absolutely loved it But it was never quite enough And then I took many, many months off of juices entirely And recently I bought this Omega J80086 and I’m just absolutely loving it I’m loving all the life force and the chi of all the fresh vegetables, sometimes fruits

And honestly my body is just craving it first thing in the morning like a nice healthy greens juice And, you know, we go to the store and we see those shots that give us, you know, turmeric, ginger and you know lemon and sometimes honey if we’re unlucky And you know that’s great and all That gets the job done But I want to show you some other super dense vegetables, some of them are leafy vegetables and also they just overall antioxidant, antiviral, antiparisitic qualities and highly alkalizing and yeah they’re also very anti-flammatory this whole concoction

So yeah I’ve absolutely loved juicing I think it’s a really important piece of the puzzle I don’t think it’s enough right? And that’s hence all of the supplements that I had showed you guys if you bought the video coaching program And if not, then you’ve probably read about it on my site But this is just a really cool little thing to take a quick shot or two in the middle of the day if you’re feeling tired and need a little boost So I don’t know what we’ll call this

It’s actually not the best for the citrus type fruits but it still gets the job done But it’s amazing for leafy vegetables and you can add cilantro and wheatgrass to this concoction if you really wanna make it like a heavy duty chelator Cilantro and wheatgrass juice are some of the most powerful chelators on the planet And your body reacts in them way better than it would frozen wheatgrass, previously frozen or regressed powder or cilantro tinctures The fresh wheat grass and cilantro juice is a whole other animal in terms of chelation

I don’t really need to discuss that much but powerful antioxidants, powerful anti-inflammatory, alkalizing for the body Garlic, another essential piece of the puzzle for bedbugs The sulfur helps with mercury and all metals This garlic juice comes out real thick so you kinda have to jam it out I like throwing a lime in there once in a while

Make things interesting With this juicer, you don’t even need to cut off the skin as long as they’re washed and they’re not super dirty We got some lemongrass here Lemongrass is really badass You know it’s found in many different parts of the world but very often in the amazon jungle and this is the plants shamans use so often

This is their remedy for almost any stomach ailment, parasites, all kinds of digestive issues “Hierba luisa” in Spanish is what they use for everything In fact if you go to a really good Ayahuasca Center, what they’ll have you do before drinking Ayahuasca is they’ll have you drink a super concentrated hierba luisa tea and followed by drinking a bunch of water It’s called ______ and this is when you drink basically super concentrated lemongrass tea followed by so much water that you’re forced to puke And this energetically allow you to release some stuff that you’re holding on to before drinking Ayahuasca

So you know this is gonna be a lot of lemongrass but I really really love it And so is my body I jammed the machine up Yeah, I break this up into pieces but not this time Actually the only other lemongrass I have been using is this little guy here

I’ve never used that perfect full plant so I guess the juicer can’t really handle it I must say that this juice is badass Honestly, this is the first time this has ever happened and I’ve been juicing everything Use the little ones or cut the pieces in half All right then we got parsley

By the way, this juicer is really amazing Like that was the first time I’ve ever seen it jammed up so I don’t want you to think that this isn’t a good juicer or the right one to get I mean I’ve own a bunch of them and I’ve been nothing but pleased We got some rosemary here; it’s from the garden actually Three more ingredients

Now of course you don’t need all of these I just like making it above and beyond of course That’s The Detox Dudes way This is some watercress very, very nutrient dense Awesome plant

But you know, not a full juice, just kind of enough to you know take a few big sips and charge yourself for the next few hours So I’m gonna shake this up and sometimes what I do is put a little stinging nettle from the Herb Farm A little dropper and some horse tail from Herb Farm My two favorite herbs for heavy metal toxicity Not to detoxify heavy metals but to support the system

Horsetail has silica, which is essential against aluminum And nettle has, I think it’s probably, funny I never did the nettles but it’s probably the most nutrient dense plant on the planet as far as the nutrients that the body really needs especially when detoxing heavy metals So last but not the least, I’ll throw in some nettles there Now of course you can make less substance if you want Right? There’s too much liquid to kind of take a shot with, that’s fine

And I generally make little smaller doses than this one I’m just taking my shots where you can take one shot now and take another show in an hour or so So generally it’s not a good idea to chug the juices You really wanna coat them with your saliva a little bit especially if you’re having a really large glass of juice If you’re having a shot or two, it’s fine, just take it down

This is just passing that amount of juice that you can really chug It’s gonna upset your stomach especially with all this super strong stuff So I’ll just have it in three or four big gulps To me, it’s amazing Other people probably cringe

I really, really love it though The lemon makes it nice and sweet especially for me I rarely have sugar so it’s really a treat So that will go right through you brain It’s like it charges you

So I’ll go over the ingredients one more time I put lemon, garlic, lime, gingers, parsley, daikon radish, lemongrass, watercress, nettles I had a little rosemary from the garden Sometimes I put rue herb in there sometimes And then of course horse tail and nettle if you want to boost it

And you know what I do once a day is also make a greens juice Typical celery, cucumber, mint, ginger, the ones you find in stores But this is also what I like doing once a day to really go really dense with the vegetables So yeah, hope you enjoy it See you next time