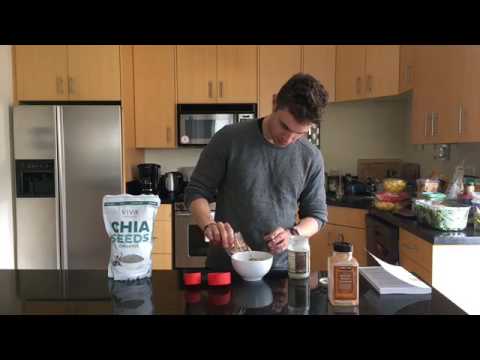 Hey this is Adam Brown from diaTribe, and I wanted to share a recipe that's totally changed my life, and actually the lives of a lot of other diaTribe readers I shared this in a column last fall

It's called chia pudding, which sounds a little bit strange, but I promise you it's a total game changer for breakfast, at least for me and a lot of other diaTribe readers I want to show you how to make it because it's a little bit nuanced, but nailing the recipe which I've made about 200 times now actually makes a huge difference So what you need – it only takes a few minutes to make in the morning, and it's perfect as a quick on-the-go breakfast – you need some chia seeds which I buy in bulk online This costs about 10 bucks and lasts about 20 breakfasts So I do a quarter cup of chia seeds, and then half a cup of water, and what's cool about chia seeds is they're almost totally fiber, they're 80% fiber, and when you put them in water they soak up the water, so you give it a good stir, and as you keep stirring it, stir it for about 40 seconds or a minute, it soaks up all the water and makes this weird, cool, pudding-like gel that doesn't really taste like anything

Chia seeds kind of taste like poppy seeds and don't taste like much, so it's all about how they're flavored, which is why the recipe is so important So you give it a good stir, and it'll slowly soak up the water, and some people quadruple this, so they make it in a batch by quadrupling it, but Iike to make it right before breakfast And you can see it kinda gets this gel-like pudding, and as that soaks up the water, then I usually add a little dollop of coconut oil, because I like the taste of that, and I'll put some cinnamon in there, and then I like adding some peanuts, and you can also throw in raspberries or blueberries or whatever, and give it a good stir The nice thing about this is that it doesn't really increase blood sugar very much, so I'll just take one unit of insulin for it, as if it was like 10 grams of carbs, but you can take the insulin right when the meal starts, so you don't have to guess 20 minutes ahead of time, and about 95% of the time I see a super flat increase in blood sugar or no increase at all And that's it! If this sounds interesting to you, this is just one of about 43 bright spots in my upcoming book, so you can go to diaTribe

org/bookgiveaway and sign up to get the book for free before it comes out, and I'm really excited to share this recipe and also tons of other mindset and food and exercise and sleep bright spots Thanks for listening and let us know what you think in the comments We'll also post the recipe down there to make it really easy Thank you!