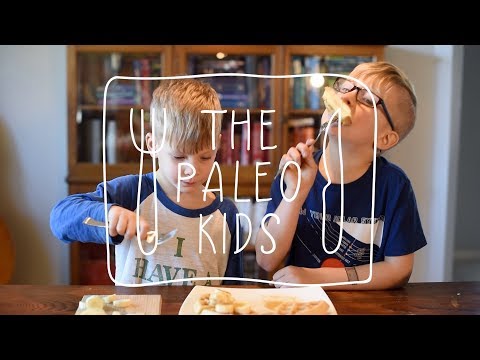 Today on Paleo Kids waffles! The Paleo Kids! Today we're making Paleo Grain-Free waffles a half a cup of almond flour a half a cup of arrowroot flour a half a cup of cassava flour a half a cup of coconut milk four eggs you gotta teach me, Gus do dis this is good baking powder but if you're Paleo, it has corn in it so we made our own it has arrowroot, baking soda and cream of tartar we have vanilla next we have sea salt they say to use stevia liquid, but we're using monk fruit instead now finally, just cream of tartar there's one important tool for this thing that is a waffle iron here's a tip plug it in before you start mixing now mix it up let me try now when it's ready, scoop about a cup of batter set your timer for 35 minutes when the timer is done, it's really hot so let an adult get it out yum