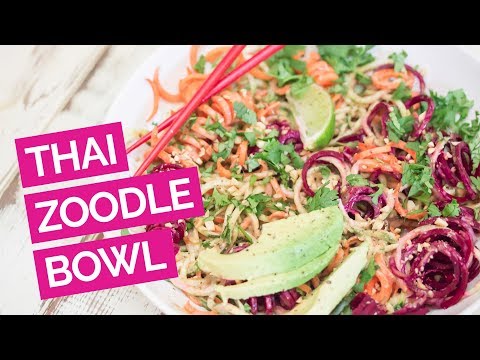 (upbeat music) – Hi, I'm Jerry James Stone, and I'm gonna show you how to make this delicious Thai zoodle bowl It's more than zoodles, but we'll get to that

A little bit of honey, and then some sea salt Add in a little bit of brown sugar, and then some pepper flakes Depending on how spicy you like it, you can put a pinch, or you can put in a lot It's all up to you Okay, and so now we're gonna add in some ginger tea, and the reason I did this is because I buy ginger for a recipe, and then I have all this leftover ginger that I never end up using, but I drink a lot of ginger tea, so I always got that on hand

Just add that in and then puree it all up Okay, so now we're gonna make our zoodles, and really you can use anything you want I'm using zucchini and some summer squash and carrots, but I've also used beets and other root vegetables for this salad It's super tasty Whatever you wanna eat, it works

So what you need to do first is cut off the ends So stick it onto the spiralizer, and then you might have to actually adjust the blade too Certain blades work better with certain vegetables Go ahead and run those through Look at those beautiful noodles coming out of there

I just like to stare at the curly q's that are coming out of the spiralizer And then we're gonna add that to the mixing bowl with some of the salad dressing and just toss it all together I like to start off with a little bit of the noodles and kinda get it worked in, because if you add 'em all at once, it's hard to get 'em evenly coated Once they're coated, transfer them to a bowl We're gonna chop up some fresh cilantro and top the salad with that, and then also chop up some peanuts and add that on top too, because what's Thai food without more peanuts? And then we're gonna go ahead and slice up some avocado, which you can never have enough of

Throw on a lime wedge, and you're pretty much ready to go I love this salad It's a great side It's a great entree No matter which way you wanna go with it, it's super filling, but it's also really fresh and healthy

If this is your first time watching one of my videos, hey, subscribe, and if you like this one, give me a thumbs up Also, drop me a comment if there's something that you wanna talk about, 'cause I like to talk about food And I'll see you guys next time (upbeat music)

How to use Blood Instead of Eggs in Your Baking Recipes! – Paleo Egg Substitute!