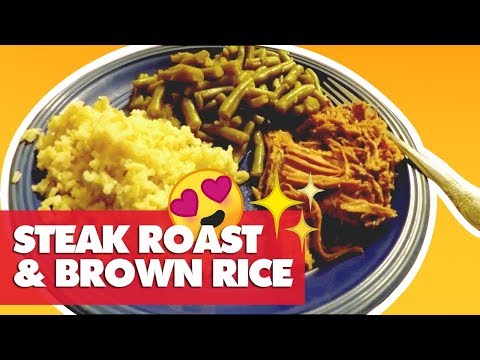 This bloody mess I have here is two, 2 1/2 pound round beef roasts and instead of just doing one, I'm doing two of them I just defrosted them in the microwave, we have a nice defrosting setting And then, I'm gonna do some brown rice in the slow cooker, I've talked about it a whole bunch, when I had my other channel attempt, I think I had a video dedicated to it I'm not sure, but I'm gonna show you again in this video, also quickly, how to do brown rice in the slow cooker You can also do it in the Instant Pot, and I'll have that video coming out as well

But this is just my tried and true way I have done brown rice with no thought over the years One of these roasts would be fine for our family for dinner, but if I do two we'll have enough for lunch or leftovers tomorrow I don't know for the full dinner tomorrow night, but we'll definitely have enough bumping around leftovers If I just do one of them, Daniel and Amelia are talking about Bob the train, 'cause they are pausing their show while Mommy gets dinner going So anyway, I'm gonna get these in

So all I did, guys, was some cracked black pepper and some Himalayan pink salt Also about a tablespoon of garlic powder, tablespoon of parsley flakes So I'm just putting the lid on it, and it's just gonna sit up here and like it Put it on high for four hours, and that's gonna be our dinner tonight, you're gonna see, it's gonna make lots of good sauce, too So this is four cups of brown rice

I just rinsed it, and all it needs, it's gonna go in the slow cooker, I did spray the slow cooker with some non-stick spray, and I'm gonna put in eight cups of water, and it is gonna sit in the slow cooker on high for about three hours and like it Here is our second pouring of four cups of water, so that's eight cups of water, total Now I'm just gonna put the lid on, and it'll be on high and like I said, this is good on high for about three hours and so, yeah, it'll be waiting for us So here are both round roasts, nice and hot, won't put my camera too high, but I'll show 'em to you on the plate here in a minute And then here, just perfect, is our rice, and I had already put some butter in there to melt, and a little salt and pepper, and that'll be perfect