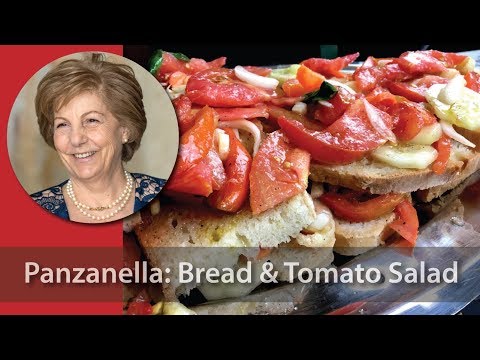 The famous Italian bread salad: Panzanella! This recipe comes from the Umbria region of Italy and will serve four as a main course or six as an appetizer To make this dish you will need: about two and a half pounds of fresh ripe tomatoes, three to four stalks of celery (strings removed), three basil leaves and a carrot, 1 to 2 small onions (depending on your taste) and about nine tablespoons of extra-virgin olive oil, 2 tablespoons of apple cider vinegar, two cloves of garlic, four teaspoons of fine salt and one teaspoon of black pepper

You will also need one cucumber and about 14 slices of some kind of dense sourdough bread, preferably a few days old Step 1: Prepare the vegetables! Peel the cucumber and cut into medallions Thinly slice the onion Use one to two small onions depending on your family's taste Slice the tomatoes into large bite-size pieces

Cut the tomatoes directly into the bowl since we don't want to lose any of the tomato juice (This is more or less the size) Slice one small carrot After the celery has been cleaned of strings, slice into small bite-sized pieces Tear the basil leaves in half and add to the vegetables Also add two whole cloves of garlic We will remove the garlic later after the vegetables have had time to absorb its flavor

Give it a quick mix and now it's time to season! Add to the vegetables four teaspoons of salt 7 tablespoons of extra-virgin olive oil (Put the black pepper) and the black pepper Add all 30 milliliters of apple cider vinegar and give the vegetables another quick stir At this point look at the juice that remains at the bottom of the bowl Cover and let the vegetables rest in the refrigerator for at least 30 minutes

After 30 minutes to an hour it's time to assemble our salad! Give the vegetables another quick mix Since the salt has extracted additional liquid from the tomatoes, you should notice more liquid in the bowl than you did before Prepare a bowl of cold water and give each slice of bread a quick dip in the cold water And arrange the slices of bread on a serving tray to create the first layer of bread Generously drizzle on some extra virgin olive oil and add a bit of the vegetable juice on top of each slice of bread

Generously distribute about half of the vegetables onto the first bed of bread and repeat to create a second layer of bread And top with the rest of the vegetables our Panzanella is finished! Cover and return to the refrigerator for about 30 more minutes, because panzanella is best served cold Before plating, drizzle on extra virgin olive oil, salt to taste and serve!