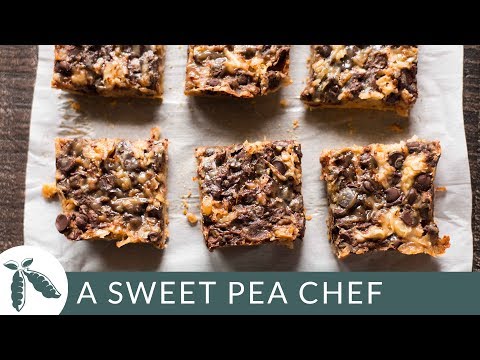 Hey there, Lacey here with A Sweet Pea Chef And today, I've got seven layers of delicious, unrefined, sweet goodness

I've partnered with Bob's Red Mill to bring you some delicious paleo seven layer bars So let's get started Go ahead and start by preheating your oven to 350 degrees Fahrenheit, and line a square baking dish with some parchment paper For our first layer, we are gonna be making an almond meal crust So in a large mixing bowl, add Bob's Red Mill's almond flour, pure maple syrup, coconut oil

We're gonna mix this together until it all gets nicely combined, and you're gonna want it to be a dough that it sticks together when you press it Now, transfer this mixture to our prepared square pan, and we're gonna press this into the bottom using our fingers, or a spoon You want it to be an even layer across the entire bottom of the casserole pan Now, transfer this to the oven, and we're gonna cook it for about 14 to 16 minutes What we're looking for is for it to come lightly golden brown around the top

Then, remove it from the oven, and we are gonna add our second layer which is chopped macadamia nuts We're gonna go ahead and put it all around that top almond crust, and we're going to press it in using our hands very gently so it just kind of sticks in there Over our macadamia nut layer, we're gonna add some unsweetened shredded coconut for our third tasty layer Go ahead and just spread this out as evenly as possible Then, add a layer of dark chocolate chips, and make sure to get a high cacao percentage

Seventy percent or higher is the best for the least refined sugars, and the most beneficial for your health Now, we need to make our salted caramel sauce So, in a pan over medium heat, we're gonna add some coconut oil, and pure maple syrup We're gonna stir this together until it's fully melted Once it's nice and hot, we're gonna add in some almond butter, and then whisk that in until it's very smooth

Then remove this mixture from the heat, and then we're gonna stir in some vanilla extract and a little bit of sea salt to make it a salted caramel Drizzle this salted caramel sauce over the top of the dark chocolate morsel layer on our seven layer bars, and then top that off with a layer of chopped almonds For our final layer, we're gonna be making a homemade condensed coconut milk, which has two ingredients So in a sauce pan over medium high heat, we're gonna combine full fat coconut milk with some pure maple syrup We're gonna bring this mixture to a very low boil, and then reduce the heat to medium, and what we wanna do is simmer for about 15 to 20 minutes until it reduces by about a half

It's gonna become a very thick, dense, delicious, condensed coconut milk for us to use Now that it's nice and reduced, we're gonna take that and pour it over our seven layer bars to make our final layer And in order to evenly spread out our coconut condensed milk, just go ahead and pick up the casserole dish, and kind of move it around to get all of it to go everywhere Now, return the pan to the oven, and we're gonna cook it for about 25 to 30 minutes What we're looking for is for it to become bubbly around the top, become a little golden brown, and just be all delicious and tasty

Then, remove it from the oven and allow it to cool to room temperature, and then you can either refrigerate it or you can freeze it Freezing is a little bit faster, but refrigeration works fine Once it's nicely set and cold, we're going to cut it into squares So these paleo seven layer bars make a great gift this Holiday season, and show someone that you care about their sweet tooth and their health Thanks so much to Bob's Red Mill for sponsoring this recipe

If you want to know more about astronomy science, then you’re getting to figure out that it’s not an easy matter