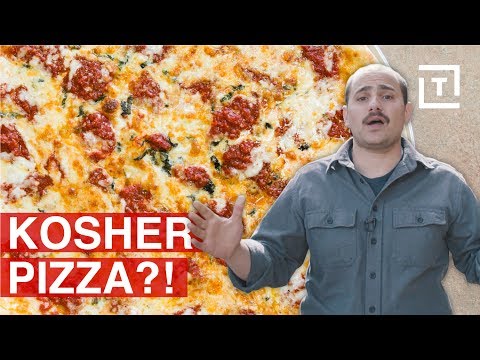 Pizza-lovers nationwide know this quiet central Brooklyn neighborhood thanks to DiFara It’s a legitimately great pizza joint, but it’s not kosher So Midwood’s devout Jews (and Gentiles in the know) go one block west, to Pizza Time: a four-decade neighborhood fixture whose kosher pies go slice for slice with the best in the city… kosher or not Today, we’re meeting up with Chanie Apfelbaum, the Orthodox Jewish Brooklynite behind kosher food blog Busy In Brooklyn,– to grab a slice and get the lowdown on the crucial importance of Brooklyn’s kosher pizza tradition – Baruch atah Adonai, Eloheinu melech haolam, hamotzi lechem min ha-aretz

Whenever we eat food, we bless the food, and different types of food have different blessings So this is a bread, the dough is made with flour and water, so it’s considered like a bread So first we wash our hands, and then I said, “Blessed is G-d that brings forth bread from the Earth” I’m Orthodox, which means I keep the laws of the Torah, um, eat kosher We live a very traditional Jewish life

I think, by the way, that’s a lot of what people love about Pizza Time, is the tomato sauce A lot of the kosher places make a very sweet tomato sauce And this has like, it’s a little bit sweet, but also savory, which I really like, because I go for spicy foods, but – Yeah Oh man

And like, you can see… the mark of a good grandma slice is when you can see little pools of grease pooling up And there’s nothing in eating kosher against grease, right? We can have as much grease as we want? – It’s all about the schmaltz! – I can get behind a dietary practice that’s all about grease I’m into it – This is a little bit of a Pizza Time specialty, and… they dump mac and cheese on top of it – I think this happened because there’s so many young teenagers coming in from yeshiva, and they’re just so hungry

– I’m gonna go for a bite – I feel like now that Brooklyn’s such a hot, cool place, being able to say that there’s a really good kosher pizza place in Brooklyn makes you kind of part of the story – I feel no need to qualify this, like “oh it’s good, for [being] kosher” You know, it’s not a qualifier It’s just good pizza

– I feel like it’s my mission, kind of, to like, show the world, people who don’t understand kosher and don’t know about kosher, that it’s the same food It's pizza It's Chinese food It's ice cream It’s all the same foods, using kosher ingredients