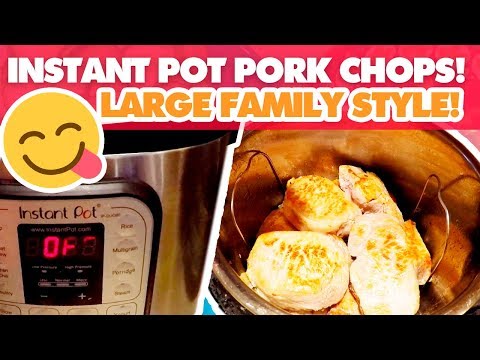 – Okay friends, tonight I am doing Savory Onion and Mushroom Pork Chops in the Instant Pot I'm also letting someone in my door, apparently

And I'm doing potatoes in the 14 quart GoWISE Everything good? – Yeah, gonna use the restroom – Yes, good, okay Anyway, I'm out of breath I just filmed a whole bunch of that, and my audio wasn't working on this camera when I checked it, ha ha

So, here we go, take four (baby squeals) Woooo, but now the audio is working I have 10 pounds of yellow potatoes that I am doing in the 14 quart electric GoWISE pressure cooker I'm puttin' in my cup of water, and I'm gonna carry those over, we're gonna get those goin' And then I'm going to get the boneless pork chops going in the Instant Pot

It's Sunday here, and as I also have been filming a weekend vlog, so if my shirt looks similar or whatever, it may be because you've already seen that vlog But in that vlog I shared, Benjamin has been teething and he was up and down all night He had a fever of 1042 and we just had a long night So, because of all of that, we were not super heroes, we did not make it out to church today

I don't think I really got to bed 'til after 3:00 We slept in 'til after 10:00 So, we've had a Sunday that has kind of followed, I don't know, it's kind of felt like a Saturday So, Jesus knows though, sometimes you have teethin' babies, right? So, I'm gonna get this dinner goin' We got all kinds of fun things going around

Goin' on in the forest and out and about adventurin' this week So, I wanted to get an Instant Pot dinner goin' for tonight, and Travis just went and took my van to get it filled up with gas (baby squeals) Woooo Benjamin! For a big Adventure Camp field trip the kids and I are doin' tomorrow, which I also hope to vlog for ya Gettin' very vloggy around here So, if you hear the kids outside, they are making up their own language

Their own num-num language, they're calling it Anyway, on the Instant Pot, I'm gonna hit saute I'm gonna put some olive oil in here, and probably I will tell you about a tablespoon or so of olive oil Anyway, we are going to sear the pork chops, just put a nice little coating on them before we pressure cook them It makes 'em look pretty

I have our little bit of olive oil in there I'm just lettin' it heat up a moment (baby screams) So, oh Benjamin, they do not have to sit in here very long, I'd say about 45 seconds or so, and then flip 'em So it's gettin' noisy in here 'cause you can hear my meat is cracka-lackin' but here's how the first three pork chops look These are the big, thick Costco ones

We're gonna do five pounds total But to saute 'em first, just puts that nice little crispy brown edge on 'em And you use just a very little bit of olive oil If you have butter, that would work well, or coconut oil I am out of real butter and I just thought hey, I'll use a little bit of olive oil, so that's what we're doing

So here is the beautiful stack of nicely browned pork chops, and now we're gonna actually cook 'em all the way through in the Instant Pot And now I have the pork chops back in the Instant Pot I'm adding the cup of water You can add in chicken broth or any kind of other broth that you would like I have water and so, yay, water wins

I also have a can of mushrooms that I'm gonna put in There they are And then I'm just sprinkling in one good 'ol faithful pack of onion soup mix Okay, and I just added some salt and pepper to that also We want it to build up pressure, so we put it on sealing

And now, I am just going to hit manual, and we had it set way high for something else I was doin' the other day, we're gonna put it on 15 minutes And when they're done, we will check the internal temperature just to be sure that they're cooked properly, but there's nothing else that needs to be done And obviously, you can get super creative If you wanna do an onion soup packet, if you wanna do other spices I found some tomatoes

I've got some cucumbers, we're gonna chop those up I chopped all three cucumbers so we can, and what we don't eat tonight and now, we won't eat all these tonight with dinner, but they'll be chopped and so they'll be ready for tomorrow as well And then I went ahead and did four tomatoes 'cause those need to get going too And we only technically have three tomato eaters in our house, which is Jayden and Amelia and I We like tomatoes on sandwiches and salads and all of those good things

So when I get tomatoes, I have to make sure that us three get them, 'cause I hate to find a tomato that missed it's purpose in life Then I just took the lid off over here, on these yellow potatoes, and they are just absolutely perfect So we will be having these with butter and sour cream for dinner So here's the potatoes I just took them out of the 14 quart electric pressure cooker and just put 'em in this bowl

And I'm gonna use a slotted spoon here, and that way everyone can make baked potatoes to go along with their pork chops So I just pulled the lid off and I also checked the internal temperature of all these pork chops, and they are perfect So we're gonna get 'em a plate now and eat 'em for dinner Get our pork chops out here, and I tell ya, kids are gettin' clean now We're gonna eat this dinner

We gotta get to bed early, 'cause we'll be on the road at least three to four hours tomorrow So here are our baked potatoes, cucumbers, tomatoes and then these yummy pork chops So guys, this is how dinner turned out We also have already begun to dug in I was just about to, and I thought, I've gotta show you my dinner

Yes she is, she's been eating a bunch of tomatoes already I guess that's it So, thank you for hangin' out with me and makin' these really easy and oh, so yummy pork chops in the Instant Pot Head over to largefamilytablecom for the pork chops and the potato recipe again, if you need it

And I will see you real soon with another brand new video, bye-bye