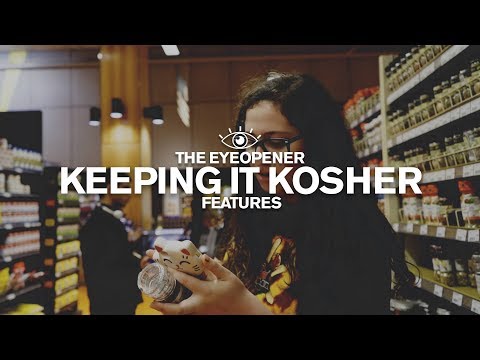 Today we're with the eye-opener to show you what it might be like to be kosher We're gonna be gathering ingredients for a typical kosher meal: matzo ball soup But first, what does it actually mean to be kosher? An average person might think that kosher food is simply food that Jewish people can eat, and by extension, food that's blessed by a rabbi To delve a little deeper, the word kosher means fit or appropriate in Hebrew Much of what defines kosher food can be traced back to the Torah, the book of worship for Judaism

As it is said in Leviticus 11, any land animal that shoes cut and has split hooves is kosher So pork is out Any sea creature that has both fins and scales is also kosher As for birds, any creature that has a cruel or predatory nature is forbidden, as it is believed that those qualities would be absorbed in the Consumer There must also be a complete separation of meat and dairy products The two should never mix together in the stomach

So matzo ball soup Is a lot like chicken noodle soup, but instead of noodles you get your starch from matzo balls Matzah is Unleavened bread You buy matzo meal, which is a powdered version of it You mix it with eggs and a few other things like spices Whatever you want, and you boil these balls matzo balls! Squishy, delicious, amazing

One, two, three We love to count I'm saying two dollars for these bad boys Two dollars So like what exactly is the difference between normal salt and kosher salt, what makes it kosher? Well it's funny that it's named kosher salt because It's not actually slaughtered in a kosher way It's just a bigger grain of salt

That's the only word they use to describe it so My idea is that we're not gonna be able to find Too much of the meat ingredients here, and I don't know if we'll be able to find Matzo meal to make the matzo balls So that's probably not gonna happen $529, baby Oh we are overbudget How are we doingwhat was our budget to begin with, like 40? Yeah, 40 This is the epitome of the kosher section It is from Here, to Here And it's not even down there, it's just up here

We didn't get all the ingredients that we set out to get We didn't get any of our meat so it's pretty inaccessible to find Kosher ingredients, especially chicken, so you'd have to go to other places In Toronto to find that and a lot of them are kind of out of the way One that we called is in North York And then it's also pretty expensive, like by the time we'd add the chicken and both the chicken wings and the full chicken it would be Over budget So pretty expensive find this stuff

It's pretty hard It's also, on a student budget, really difficult to keep kosher Especially considering groceries are expensive enough as they are This has been kosher shopping with the eye-opener, and if you want to read more about it, check out this week's featured article Alright, let's put this stuff back