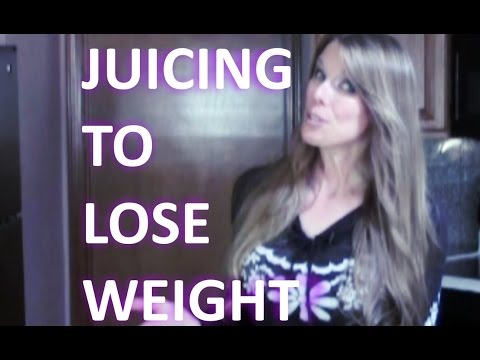 Hey, I'm Kristin Shaffer, national-level bikini competitor, mom, and businesswoman If you're ready to find out how bikini models get their amazing bodies, you get it all right here, right now

Before we get started today, I want to remind you of my free 6 Weeks to Sexy, Fit, & FAB plan You can get that at FAB-Universitycom and FigureAndBikiniorg Just sign up for the weekly email updates

You will get that plan and a bonus Right now I'm actually getting ready for a competition about two weeks out You can get my exact meal plan that I'm inon—not "in," "on"—right now Like, right now Today we're gonna talk about juicing Now, if you're familiar with juicing, or if you're not familiar with juicing, it's the process of using a juicer and putting a whole bunch of stuff in it, and it separates out the liquid and the stuff from the pulp

We're talking about vegetables, fruits, sometimes added proteins, and even fat sources like peanut butter So, technically, "juicing" is using a juicer where you're separating the liquid from the pulp and the fiber, but a lot of people also use a blender to juice, which technically is not really the same thing, but a lot of people are doing that And we're gonna get into what the benefits of the fiber—keeping that in it—are later The practice of juicing has been around forever I mean, you probably remember Jack LaLanne

I sure do When I was a kid that was huge Jack was in everybody's household, and today, once again, juicing is wildly popular And those that are promoting juicing make all sorts of claims, like, "It's better than eating the whole fruit or vegetable" "You can actually get more fruits and vegetables in your diet by juicing

" And, of course, my personal favorite: it helps you to lose weight Juicing is so popular today There's hardly a day that goes by that I don't here somewhere, in the office or if I go out to lunch with friends, that somebody's talking about juicing or the latest juicing recipes that they're sharing with all their friends So you know me, we're going to talk about those claims today that these adamant juicers make and whether or not this is fact for fallacy The first claim is that juicing is actually better than the whole fruit or vegetable

Some juicers claim that it just eases our digestive system, that we don't have to eat all that fiber, and they even claim that the nutrients are better absorbed in our body when you separate the liquid from the fiber or the pulp Really? No This one is absolutely, positively false There is no scientific evidence to support this one There's nothing to support that taking the fiber and pulling that away from any fruits or vegetables actually helps our digestive system at all

As far as absorbing the nutrients better into our body, well, there's nothing to support that either Nutrients might be able to be absorbed quicker because in a liquid form it gets processed quicker in our body than it does in the solid form But as far as better absorption of nutrients? That one is also a fallacy Actually, by pulling out that fiber, that pulp, our body doesn't have to work as hard to digest it and that's why it absorbs it very, very quickly, and we're going to get to why that might be an issue in just a little bit here The second claim is that juicing reduces your risk of cancer

Number three: it's a way to get more fruits and vegetables in your diet Well, this one, for many, actually probably is true It's a fact that most of us don't get enough vegetables and fruits in our diet, so by if by juicing you're getting more—just as we talked about in the last one—if you're getting more fruits and vegetables, vegetables in particular, then juicing may be the way to go for you The American diet in particular is seriously lacking in vegetables and fruits If your juices are loaded up with tons and tons of vegetables, that could be a huge benefit for you

Number four: juicing gives you more energy Yeah, this one is totally false There is no evidence—zero—that juicing gives you any more energy than it would if you were eating the whole foods in the first place Actually, if anything, due to that quick absorption of the nutrients into your body—and if you're eating fruits in your juices that sugar gets quickly absorbed into the body—you may get a burst of energy right away, but it's not going to be sustained because your body processes it so quickly And very much like I've talked about, if you've seen my other videos about processed foods and how quickly those are absorbed into the body, and they give you this spike of your insulin and then you come crashing down on the other end, which causes a whole host of problems

Well, juicing, especially if you have a lot of fruits in your juices, which most people do—we'll talk about that in a minute too—well, that can be problematic when it comes to your energy levels What juicing actually might do is give you more hydration if you are prone to not getting enough fluids in your diet throughout the day Me, personally, I drink over a gallon of water all day long For most of us, that's not true A good portion of us live in a dehydrated state, and when you're dehydrated you become sapped of energy and your strength is greatly reduced

So, with juicing, you're actually gonna get more hydration and that might give you, in and of itself, energy and strength, but it's not the juicing, it's the hydration Number five: it makes you live longer Jack LaLanne lived to be 96 years old, and not just 96, but a vibrant 96 That's one impressive individual So, with this claim, this actually might be true, but, again, it's not because of juicing in itself

It's probably because individuals are getting more vegetables in particular, which Jack LaLanne was a huge proponent of tons of vegetables in your juicing, as opposed to not getting any vegetables at all in your diet, which, again, the American diet is just sadly lacking in vegetables There is evidence to support that a diet rich in vegetables and some fruits, plant-based diet primarily, does help us to live longer So if juicing's the way that you do that, then go for it Number six: juicing helps to reduce toxins in your body False

There is no evidence to support this one at all Now, I can hear you saying right now, "Yeah, I gotcha But, Kristin, I went on this detox diet and I was juicing for days, and then I went on a fasting period and I felt amazing afterwards So what the heck? This can't be true" What was probably the case on that "detox" diet is that you cut out all the processed foods in your diet and all the processed foods that were in your body at the time, and if you've watch my other videos—and I encourage you to—you know how bad processed foods are for us and all of the negative effects that it has

So simply by cutting out all of those processed foods, that's probably why you felt amazing, not the juicing in itself And number seven, last but not least, my favorite one: juicing will help you to lose weight Hmm…no Nope Nada

There's nothing to support this one either—zippo, zilch You might be surprised to learn that a very high percentage of the women that come to me looking to lose weight, when I dive into their diet I find out that they're juicing They think that it's healthy They think that it's going to help with their weight loss, and then when we dive into it we find out that it really doesn't Most of the time it's because they're adding a ton of fruit to their juices

When you add a bunch of fruit to your juices, even if you have a ton of vegetables, you're adding a ton of sugar and calories That can really stall your weight loss progress Additionally, because the juice is absorbed very quickly into the body, you don't have that insoluble fiber in there Since it's processed very quickly and it doesn't sit in your stomach, you're probably going to be pretty hungry pretty quickly afterwards and you're very likely to overeat later Candidly, I like to eat

That's why I like the whole food sources rather than juicing So, bottom line: is juicing good for you? Well, yeah, it actually is if you stick with mass amounts of vegetables If you're adding a bunch of fruits that add sugars and calories then it may not be so good for you, in particular with your weight loss goals In and of itself, juicing will not help you to lose weight But if you still want to juice because you do want to get more vegetables in your diet and have all those other benefits that we talked about, here are my top recommendations on how to do so effectively and actually accomplish your weight loss goals

Number one: make sure that your juicing is predominantly vegetables And I mean tons of vegetables Stay away from the starchy ones Starchy carbs, starchy vegetables tend to process quickly and then when you put them in that liquid form they're gonna process even more quickly—not desirable for somebody who wants to lose weight Number two: ensure that juicing isn't an addition to your caloric intake, that you actually take into consideration the calories that are involved in your juicing because they do count

It's all too easy to go over your daily caloric needs because you're juicing and because it's in liquid form, and sometimes that doesn't fill you up, like we talked about earlier And then number three: really watch those fruits If you're putting them into your juices, make sure it's really limited quantities, and if you're going to be juicing, the timing of when you're taking in that juice is actually really important, if you're adding fruit to it, when you're trying to achieve your weight loss goals First thing in the morning and first thing right after our weight workout is the best time of all to have a little bit of sugar Your body can process it most effectively during those times

Any other time and your body's likely to store that in fat, sabotaging your weight loss efforts So that wraps up today's episode I hope you really enjoyed it, and if you did, go ahead and leave me comments Like I said earlier, I love hearing from you guys And, remember, I'm still offering that 6 Weeks to Sexy, Fit, and FAB plan