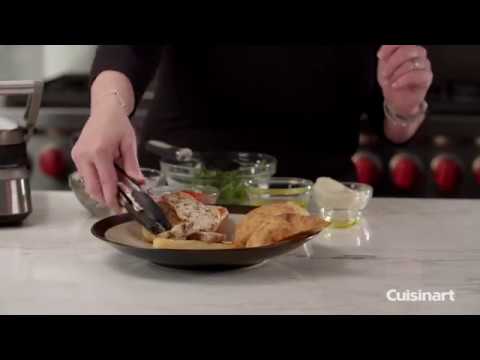 So, let's go ahead and make an Italian panini sandwich So, here we have our ciabatta bread and we've used the Griddler® and toasted it just by putting the buns on the plates

So, what we're gonna do is first we're going to assemble It's really simple and easy to do It's nice and savory and delicious So, just put your chicken on the bottom And I grilled this on the Griddler® earlier, you can do it, you could have done it, we could have done it with the plates open but I just wanted to do this quickly

Pinch of salt; not too much because the cheese that we're gonna add has quite a lot of salt in it And we're gonna top that with the fresh mozzarella, like so Put on the lid I'm just gonna put them on the grill plates You can fit up to four sandwiches but honestly I'm just gonna make two today

So, the timer goes up in thirty-second increments and then you're just gonna press the button in which engages it and for the first minute that you're cooking these sandwiches, you're gonna press down on the handle so that it actually compacts the sandwiches and that's gonna make them nice and crispy So, let's check on our Italian panini sandwich See how it got nice and compressed? It got nice and compressed to toast it It smells really delicious This would be so great with a nice bowl of hot soup in the winter

Simple and easy to make, only took six minutes put together It's delicious, it's crunchy, and has nice melted cheese inside What's better than an Italian panini sandwich?