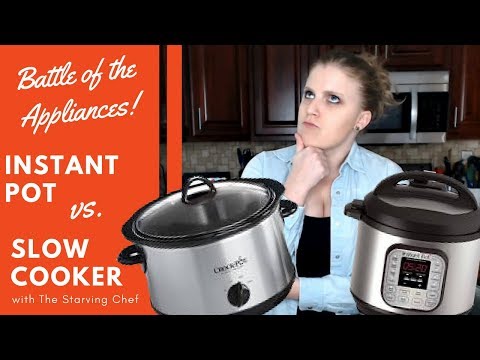 From Instant Pots to slow cookers, it can be hard to tell which appliance is perfect for your personal needs What's up hungry people

Welcome to the Starving Chef's kitchen Today we are going to take a look at the two most popular, and probably most disputed, kitchen appliances that are around: the super trendy Instant Pot and the classic slow cooker Slow cookers and crock pots have been around forever But the main concept is still pretty much the same: Just set-it and forget it Crock pots and slow cookers are really good for dump dinners, where you just throw all the ingredients in there, turn it on and then let it go for like, 8-10 hours

It should cook everything throughly so that means they are really good for making roasts and stews, and basically any recipes you don't want to stand around and work on But the problem is, is that a lot of slow cooker recipes do require extra steps in order to actually get good results And that can be anywhere from searing your meat before you put it into the slow cooker to cooking down your onions until they are dark brown and caramelized While 'set-it and forget-it' sounds great, there a lot higher chances you will literally forget it A benefit to slow cooking is that you don't really need to worry about a temperature

Most slow cookers and crock pots have one or two settings – usually a low, high and then like a 'keep warm' setting If you can figure out which setting is best for your recipe, then it may do the trick BUT The problem is, is that most slow cookers, especially crock pots, do not have an 'auto-off' function So you can set them to cook for ten hours, and then they just keep cooking if you don't turn them off

Now while that may not be true for every single kind and brand of slow cookers and crock pot, mine is very much one of the ones that does not have an auto-off function If I want my food to stay warm, I have to manually set it to a 'keep warm setting' Now maybe I should get a new slow cooker, but that's why I got the Instant Pot Here we have the AMAZING INSTANT POT Super popular for wedding gifts and for gifts you don't know what to get your grown daughter, Instant Pots are slowly replacing the slow cooker world

While the Instant Pot name implies instant results, that could not be further from the truth In fact, if you're pressurizing something it could take considerably longer For example, if you're cooking a pork loin from frozen you'll want to cook it on a high pressure for about seven to ten minutes But the problem is, is before you even get to that seven to ten minutes, you have to let the Instant Pot pressurize and that could take anywhere from fifteen to twenty minutes And THEN the seven to ten minute timer starts, and then there's ANOTHER depressurizing session after the food is done cooking

So really, you are taking a ten minute recipe and making it about forty minutes long because you have to wait so long for the Instant Pot actually get ready But pressure cooking part of the Instant Pot, while it may be one of the best features, it is certainly not the only one Instant Pots are awesome because of how versatile they are If you want to pressure cook something, that's not a problem But if you also want to slow cook something, there's a setting for that

So which one do you prefer? Let me know down in the comments below Don't forget to hit that like button if you liked this video and subscribe for new recipes every week I hope you all enjoyed, and I'll talk to you soon