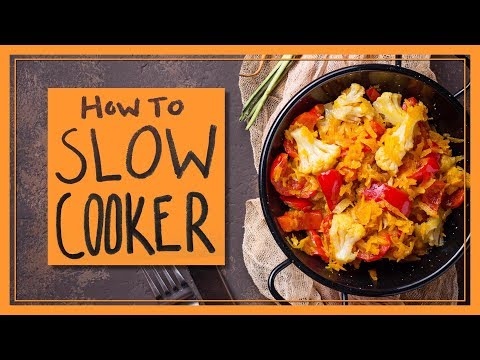 The slow cooker [Typewriter DING] Which you might also hear sometimes called a Crock-Pot, but that’s just one of those super pervasive brand names like Band-Aid or Kleenex Slow cookers are wonderful for cooking big batches of deliciousness with relatively little hands-on attention They’re awesome for cooking for a crowd, bringing to potlucks or just prepping like, a whole weeks-worth of lunches So here’s some pro tips on how to get the most out of your slow cooker

Tip 1: Think ahead As the name implies, these appliances are slow, so you want to plan your recipe at least 3 to 12 hours ahead If you want something cooked in an hour, then a rice cooker or instant pot might be a better option for you Some slow cookers come with only a few buttons, like “low,” “high” and “warm” that you’ll have to adjust manually according to the time specified by the recipe But programmable slow cookers are designed to be turned on to either low or high for a set amount of time, before automatically turning to “warm

” Tip 2: Preheat! All that said, you can preheat your slow cooker while you prep your ingredients to get them to a good cooking temperature quicker Don’t leave it preheating for longer than 20 minutes or so, though, to avoid scorching the insert And yeah, they call the pot inside the slow cooker an “insert” Apparently appliance manufacturers were going through, like, a really straightforward phase when they were naming slow cookers Tip #3: To Dump or not to Dump

Slow cookers aren’t the most hands-on appliances, but they’re not totally hands-free You may have seen a late-night infomercial or cookbook advertising “Dump” recipes These recipes tell you you can just dump in all the ingredients and everything will turn out deliciously Well, slow cookers are magic, but they’re not THAT magic If you have the time, most slow cooker recipes benefit from a little bit of advance legwork to make your ingredients the best ingredients they can be

Most slow cookers cannot sear or saute, and those are important ways to build flavor Big pieces of meat should be seared on the stovetop first Aromatics like onions and garlic benefit from a little sizzle in the pan before they get added to a stew Pasta, seafood, and other delicate items should not be added until close to the end of the cooking time If your recipe calls for a few extra steps like these, it’s probably for a good reason

But aside from boosting the flavor-factor, it’s also very important to thaw your ingredients before you pop them in Slow cookers cook slowly, so you run the risk of having your ingredients hang out in a dangerous temperature range for too long if you don’t thaw them first Tip #4: Cooking times may vary If you’re not following a recipe super closely, expect your cook time to vary A slow cooker that’s, like, half full it's going to cook a lot faster than a slow cooker that’s full all the way to the top

The first couple times you’re playing with your slow cooker, it’s a good idea to do it while you can check it every couple hours or so to see if everything is progressing the way that you expected Tip 5: Cook at night! Don’t forget that you can use your slow cooker at night—just prep before you go to bed! There are even slow-cooker friendly brunch recipes, which are great for weekends But if you live in a small apartment, be aware that the smell of anything you’re cooking will permeate the place That might be a lovely thing, but It’s something to consider if your roommate, like, really hates the smell of cooked beans Tip 6: Finish your recipe! You know what often makes the difference between a home-cooked meal and something you eat in a fancy restaurant? It’s whether the dish was finished

Finishing a dish means adding a couple extra flourishes to boost and brighten the flavor Think of like, squeezed lemon juice, or a sprinkling of chopped parsley, stirring in an extra pat of butter Finishing is a small extra step but it will make all the difference, especially with a slow-cooker meal that may have lost some of its more subtle flavors over the hours If you’ve got some slow cooker tips or recipes you’d like to share, we would love to see them down in the comments And if you’ve got some extra time while you’re waiting for your slow cooker to finish, check out the rest of our channel, and subscribe at youtube

We're actually talking about slow cookers [Hank grunts] The first couple of times you pl— [off screen] Let's do without the [grunt] [laughter] You can cut it out [laughter] The first couple times you're playing with a slow cooker, it's a good idea to do it [accidental midwestern accent?] when you can check it every coupla hours or so [quiet laughter] really hates the cooked of baked be—cook be—smell of cooked

[off screen] All done!