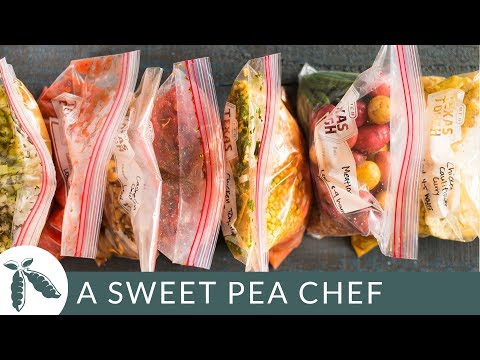 Hey there, Lacey here with "A Sweet Pea Chef" And if you're finding that you just don't have enough time at night to prep a healthy meal, but you still want to eat well, I've got the solution for you I'm gonna show you seven make-ahead, slow cooker freezer meals that you can make one day, store in the freezer, and then grab, and have it ready for you when you come home ready to enjoy a tasty meal

So, let's get started I use a 1 gallon size freezer safe ziplock bag to make my freezer meals, but any freezer safe container will work The basic idea with the freezer meal is you want to put all the stuff that's gonna go into the slow cooker that requires a long time to cook Things like proteins, harder vegetables, potatoes, things like that Then when it's almost ready to eat, you can add in the softer vegetables, like cooked beans, or sliced zucchini, or even some pasta at that point

That way you get all that work done ahead of time, and you are just ready for the end First, let's make my slow cooker split pea soup freezer meal So, in a gallon size ziploc bag we're gonna add a hambone, diced carrots, diced yellow onion, diced celery, shallots, minced garlic, dried thyme, ground black pepper, dried split peas, and low-sodium chicken broth Now we're gonna carefully press all of the air out of the bag and then we're gonna zip it tightly Then we're gonna place it in the freezer so it's nice and ready for our split pea soup later

For any slow cooker freezer meal if you're wanting to add a little bit more flavor and you have the time, browning the meat ahead of time does add some extra depth of flavor But, it's not necessary it's up to you whether you want to do it Now, to make my slow cooker minestrone freezer meal, we're gonna use another gallon size ziplock bag We're gonna add in some diced yellow onions, diced carrots, diced celery, minced garlic, chopped shallot, fresh green beans, that have been cut into thirds, some corn, diced tomatoes, sea salt, ground black pepper, dried basil, dried oregano, and some vegetable broth We're gonna press all the air out of the bag and zip it tightly and then transfer to the freezer

Once the minestrone is almost ready to eat, you have about 20 minutes left you can add in some cooked kidney beans, some cooked white beans, some fresh zucchini and then also any pasta if you wanted it to cook then too Also, make sure to label your ziplock bags so that you say exactly what the recipe is on there and I like to add how long to cook it for on low, that way I don't even have to look up any directions I just pop it on into the slow cooker and hit start All right So now, we're gonna make some slow cooker cashew chicken that is so tasty So, in our ziplock bag, we're gonna add in some boneless skinless chicken thighs

Followed by raw cashews, minced garlic, minced fresh ginger, low-sodium soy sauce, rice wine vinegar, chili paste, raw honey, and some ground black pepper Press all the air out, zip it on up and then transfer this to the freezer I love to serve the slow cooker cashew chicken with a little bit of steamed broccoli, and then a little bit of cooked quinoa, or steamed brown rice It's super good For these freezer meals I like to just take them right out of the freezer

Press all the air out of this bag and zip it tightly, and then we're gonna place it in the freezer to freeze Once the chicken is fully cooked for this chicken tortilla soup, I like to just remove it and then shred it into pieces and then put it back in stir it up and then your meal is ready to serve For these slow cooker freezer meals, you can use fresh or frozen vegetables or meat Any of that's gonna be fine because we're gonna be freezing it for later To make our cauliflower curry freezer meal, we're going to add some boneless skinless chicken thighs to the bottom of a ziplock bag

Followed by boneless skinless chicken breasts, one head of cauliflower that's been broken into florets, diced yellow onion, minced garlic, minced fresh ginger, sea salt, ground black pepper, curry powder, and low sodium vegetable broth Press all the air out of the bag completely, and then seal it tightly then transfer to the freezer When this curry is almost ready to eat, you just want to add some coconut milk, and frozen peas and stir them in until they're heated through And then, when you're serving it top it with a little bit of fresh cilantro, and you're good to go So good

To make these slow cooker meals as easy as possible to store, I like to freeze them first on a rimmed baking sheet so, that they are flat as possible once they're frozen, you can store them standing up next to each other, so they take up as little space as possible, and it's all neatly in your freezer for you Now to make the easiest slow cooker chicken Parmesan ever, we're gonna add some skinless boneless chicken breasts to the bottom of a ziplock bag Followed by crushed tomatoes, tomato sauce, tomato paste, minced garlic, sea salt, ground black pepper, dried basil, and dried oregano Then we're gonna press all of the air out of the bag zip it up tightly and then transfer to the freezer When the chicken is fully cooked I like to top it with a slice of fresh mozzarella, some grated Parmesan and then serve that over some spiralized zucchini noodles

It's so good, and so darn easy Freezer meals don't taste like leftovers, so don't worry about that They taste like a freshly made meal because they've never been cooked Now, we're gonna make a slow cooker meatloaf So, in order to make our meatloaf in a large mixing bowl, we're gonna combine some lean ground beef, two eggs, almond meal, finely chopped yellow onion, sea salt, ground black pepper, and dried sage

We're gonna combine all this either with your hands or a spoon and then we're gonna form it into a block Then place our meatloaf into the ziplock bag, in addition to the meatloaf, we're also going to add in some potatoes and green beans To make our potatoes, we're gonna add some baby potatoes to a mixing bowl Followed by a little bit of olive oil, some sea salt, ground black pepper, and garlic powder And then we're gonna toss this together

Then take those seasoned potatoes and put them into the bag with the meatloaf But make sure you put it to the side so it doesn't squish the meatloaf Finally, add some green beans into our ziplock bag on the side so that doesn't squish anything We're gonna seal it up tightly and then we're going to transfer it to the freezer Later on, when the meatloaf is fully cooked and it's time to serve we're gonna top it with a mixture of homemade ketchup, some raw honey, and some dried mustard for that tasty, mustardy, ketchupy topping that's so good on meatloaf

Plus if you're concerned about raw meat touching vegetables in these freezer packs, don't worry about that it's all gonna reach a safe temperature in the slow cooker once you put it all together, so no need to worry Just taking a little bit of time to prep these meals gives you seven delicious freezer meals ready to go in the slow cooker, any day of the week I hope you love these Let me know in the comments which one's your favorite and I will see you next time See ya