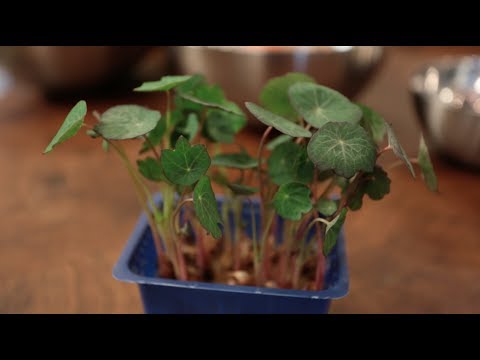 Let's move on the flame Let's heat and sweat the cabbage Here's the colored turnips let's season them with a bit of salt, a bit of oil a bit of orange juice Let's stir and let them sweat while we wait for the cabbage to be cooked Turnips are marinating; let's segment the orange

Let's remove the extremities, cut following the peel and then let's cut the slice We're making the slices to use in the plate The cabbage is starting to sweat What's important is not to cook it too much, it must stay crisp We're soaking it with the juice we put in the pan

Let's add a bit of water to continue cooking Let's cook them for a pair of minutes, no more Let's mix the turnips so they can sweat in the seasoning Let's make the sprouts as well and the leaves to be placed on the plate Let's make the cress

These are all red, both for the chromatism of the plate and the taste, as well We're ready to dish the braised cabbage up Let's roll the cabbage on the spoon and place it in the center Let's then cover with these little turnip leaves, the orange slices and let's finish with the cress Let's start from the Scarlet one, which is the amaranth cress

The red shiso, which is the Japanese basil and the Yka leaves, that is a sorrel The plate is done braised headed cabbage! Let's make the leaves Napoleon

It's a layering with all the leaves we can find at the market I found some, so we're using savoy cabbage, swiss chard, Chinese cabbage, colored turnips, cress, oil, salt, pepper and dried fruits to finish the plate Let's add this mixed dried fruits – walnuts, almonds, hazelnuts – in a bowl and cover it with water We're soaking it in water for at least 6 hours It can also be left in the fridge for 24 hours

The next day, we're blending it Let's take a pan or an oven tray and cover the base of the pan Let's start creating a layer of leaves, so: the swiss chard, let's season with a drizzle of salt and oil, let's continue with the spinach As the layer is complete, salt and oil Chinese cabbage let's press it well in order to make it compact

We can also make two colored turnips white, in this case, and finely cut them Let's create another layer again, a drizzle of salt and oil, and let's finish with the savoy cabbage Again salt and oil Let's fold the wax paper on the leaves and place a lid on top Once we place the lid, let's put it in the oven at 180°C for 15-20 minutes

This is the result We're making the cress I used these cress which are all in leaves to recall a small plate, an all-leaves Napoleon Let's add the blended dried fruits sauce with the oil we prepared before Let's add the cress leaves to give volume and for the taste

Here we have acid, spicy, scented The plate is finished! It's time for the turnip ravioli A kind of stuffed pasta that doesn't contain pasta We're using the turnip as a container for vegetables The ingredients for the recipe are: white turnip, carrots, celery, oil, salt, pepper, vinegar and aromatic herbs

Let's take a white turnip and peel it, let's cut it to remove the front and back parts Let's take a mandoline and use it to cut these thin turnip slices Let's add them in the bowl a drizzle of oil, a pinch of salt and a bit of vinegar We're turning them and mixing well Let's marinate them for at least 20 minutes

Let's make the stuffing for the ravioli In this case, we're using carrots and celery Let's remove the worst parts and just keep the core Let's peel the carrot Let's take a bowl and a grater and let's grate the carrot

The grated carrot, together with the celery I'm mincing with the knife right now will be used to prepare the stuffing for the turnip ravioli We're cutting small lozenges, and once we have our little celery stripes, we're turning them and cutting them the other way round Celery and carrots will be seasoned together but will have different consistencies: the finely grated carrot will be creamier, the celery will be bigger and crisper We're adding it in the bowl and seasoning with a bit of salt, oil and vinegar We're letting it marinate for at least 10-15 minutes as well

In the meantime, as before, we're preparing the cress Water cress, the pea – this one is very sweet so let's not exaggerate in the quantity Paztizz, instead, is very fresh It has this really intense anise taste To make the ravioli, we just have to take the turnip leaves and spread them

In the center, let's place some vegetable mixture, carrot and celery, then we're closing it as a dough In this case, we're giving it the shape of small ravioli Our ravioli are now closed and we can place them on the plate Let's start placing the cress The pea, the water cress, let's add the Paztizz – it gives the fresher taste, anise-like – and the turnip ravioli are done! We're now making apricots with pollen and flowers

It's a very quick dessert to prepare, with apricots, milk, cream, butter, sugar, the pollen which is derived from the production of bees and can be bought from beekeepers, honey and all the flowers we can find Today we're at Koppert Cress, so we're using their edible flowers The first thing we're doing: a pan, milk, cream, pollen and honey We're placing it on the flame to warm it It mustn't boil, it just have to warm up

It must be warm, not to spoil the features of honey Once cream, milk and honey became warm, we're placing it in a siphon charged with 2 gas charges and place it in the fridge to cool it down While the cream, milk and honey sauce is cooling down in the fridge, we're making the apricots The pan, the apricots, these are dried apricots, soaked to hydrate for two hours in warm water We're taking them and let the water strain a bit

We're placing them in the pan and adding a little bit of sugar, half of a tablespoon and a butternut – 10 gr, no more and we're moving on to the flame Apricots musn't cook excessively, they just have to warm up and lightly caramelize in the pan, butter and sugar created this kind of an emulsion They're done We're moving on to the cutting board Let's place the apricots on the counter

I'm taking the honey cream We're preparing, in this case, the flowers Honey is derived from flowers, so we tried to follow a logical thread in the recipe We're using flowers with great scent and taste, so we'll have an acid part, a much more aromatic part, and fresher, much sweeter So, depending on the flowers we'll use we have to take care when adding them on the plate We're preparing them all and finish the plate, in this case, a small bowl Let's cut the apricot into small slices two apricots, in this case Let's cover the apricot slices with the pollen and honey cream

A bit of pollen to give fragrance and I'm finishing it with the flowers: Apple Blossom, very acid, the Anise one, that is very fresh and scented, instead, Floregano, really scented as well, Dushi, very sweet, and finally, the Purple, sweet and scented The plate is done! The last plate we're making is the peels broth We saw this bowl containing all the leftovers from the preparation of the previous recipes Using these leftovers, we're making a broth that we're scenting with cardamom and Kaffir Lime leaves We're making an infusion with vegetables leftovers, very simple to make that can be used both as a drink, to be served warm or cold during the meal, or as a consommé

In the bowl are headed cabbage leaves, white turnip leftovers, carrot peels, spinach and savoy cabbage leaves, celery and colored turnips The ingredients, most of all in this recipe are not fixed, so we can add or remove, depending on what we have: onion pieces, leek leaves, swiss chards The idea itself is interesting in my opinion, more than the recipe in itself

To make the infusion, let's take all the leaves and the leftovers We're placing them in a pan that is ample enough and we're covering them For this quantity, 700 gr of leftovers, more or less, a liter and a half of water Salt, some drops of soy, and let's move on to the flame As the pan is on the flame, let's warm the water up not until the boiling point, more or less 80-90 degrees

I'm cutting them and adding them in this glass to make a further infusion and scent the broth even more Let's cut into small bits and fill this small jug Why choosing these two leaves? I'm using the fresh cardamom for its very warm scent, encircling The Kaffir Lime leaves, instead, possess a fresher citrus scent, giving a lively note to the broth Both the red turnip and the headed cabbage gave a violet color to the infusion

Once we're done with the vegeetables infusion, we're filtering it in the previous jug with the leaves and let it stand for 10 minutes Let's filter the leaves infusion and finish it with the cress The peel broth is done! We're now at the end We made all of the 5 recipes, using the leftovers as well from the recipes we made before These recipes are really easy to make and copy, and can be easily made at home as well, also with a change of ingredients, according to the season, so we can change the vegetables and all that we can find

What I mostly recommend you is to have fun!