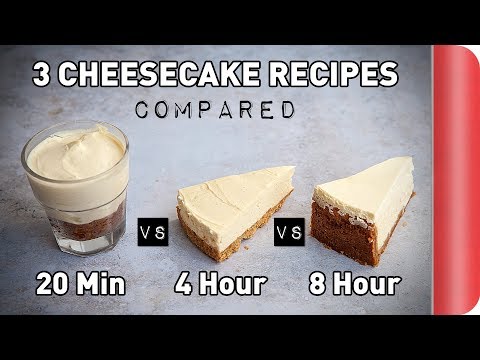 Hey, welcome to the channel We are Sorted, a group of friends in London looking for those amazing things food that make you go wow, between stitching each up in innuendos

Now be warned, we have two chefs, but we give them limited airtime And we make sure all of our ideas start with a suggestion from you Hey, everyone, I'm Mike This is Barry Today is five blokes, three cheesecakes, and one blindfold

In front of us here we have three vanilla cheesecakes, each of them gets slightly harder to make and takes slightly longer to cook The question is– yea, I'm going to say it– the question is, does it make a difference? Do they taste better? First up is this bad boy, a 20-minute cheesecake This all starts with a very simple– Base! Yeah For the base you'll need butter– And Biscoff biscuits And then for the topping you'll need– Cream cheese

Icing sugar Cream And vanilla extract For the base, firstly, melt your butter in a microwave, which is over there Whilst he's doing that, I'll crumble some biscuits

Ready Butter in, mix it up, put it in the cup Once they're in, push it tight to the bottom Now, for your filling You're not going to believe this

Put all of that in that bowl, mix it up, put it on top of the base Once you've made them look as pretty as you could be asked to, put them in the fridge, let them chill until you need them Back to the studio We're in the studio Oh

Know what I'm saying? I know what you're saying, but do you know what we're saying? Because that– We're saying if you're got a little bit more time on your hands, a little more effort, try this one Oh, I was going to guess you were going to say something else Now, this recipe you might be more familiar with This is more of a traditional cheesecake Oh, it depends on where in the world you're from

OK, OK, it's not baked, but this is what I know and I love about cheesecakes This is one of the first recipes we ever made at school It is! It is For the base, you need some melted butter and some digestive biscuits Digestive biscuits crushed up to a fine crumb and mixed with melted butter, not a huge amount of butter, relative to biscuit

20 by 20 centimeter tin, loose bottom, no unclip to easily get your cheesecake later And it all goes in, and you pack it in nice and tight so the butter compresses down, and you get something that's quite firm And then we're going to chill that in the fridge or freezer for a few minutes while we make the filling Now, for your feeling, we've got some mascarpone cheese, icing sugar, some vanilla paste, and some double cream The only thing that separates this one from the last one, is that we're going to be whipping up the double cream

Double cream to soft peaks, then we'll add our cheese So we just got these really, really, really floppy peaks, then we're going to add in mascarpone, icing sugar, and vanilla So there's no way to hide there It's super basic which is why we're going to compare them And then get the mixer back in, combine it all so it's equal, there's no pockets of vanilla, and you've got a consistency you spread over your biscuit base

The key to this one and why it sits in the middle of our three, is although it's just as easy to make, it does need about four hours to set up before you can slice it And that is a little slice of heaven Unbeatable, that is Can't beat that You might be on the gates there

But come over here Come on You always make me shuffle He's in charge This is actual heaven, right here

This is actual heaven, the chef version The chef version of heaven? Now this is a proper cheesecake, am I right? Proper in the sense, baked Yeah, it takes a little bit more effort, and it's different I'm not going to say necessarily better, but I'm going to say different We'll see at the table

The base is digestive biscuits, butter, sugar, salt, and vanilla And then the filling is kind of two-tiered filling Cream cheese, vanilla, sugar, lemon, egg, cream, and then a sour cream top It's like a double bake But the base is simple enough

Blitz out the biscuits, and then add in melted butter, sugar, salt, and a little bit of vanilla extract So it's quite a thin biscuit base, but because it's got all the butter and the sugar, it binds And then build up the sides And then we're going to put it in the freezer for about 20 minutes to chill right up before we bake for 10 at 180 degrees Celsius The filling is a whole load of cream cheese and double cream, but then it's got fresh lemon zest, vanilla, sugar, and eggs in it

Smells good, nice color, few cracks When it comes out of the oven, it's not quite ready because we have to do the same process again, which is just pressing this all the way down Once it's cooled a little bit, all of it actually you goes back in We turn the oven down to 150 and we bake it again until it's got a very slight wobble in the middle How long, James? About 45 to 50 minutes

This has had its first bake It's come out of the oven It's rested on the side for 20 minutes, not to cool completely, but just to cool a little before we put the sour cream glaze on top The glaze is sour cream, sugar, and vanilla That goes back in the oven for 10 minutes

And then we you take it out, let it cool to about room temperature before chilling it gate completely in the fridge No doubt about it, special occasion, that's the one How do you say, no doubt about it? We haven't tasted it yet All right, then, start that in What are you doing? We compacted the biscuit base so well

I'm going in for more That's tastes like a good cheesecake That, to me, is a really good cheesecake, and I love that How much more love I can give? This one I don't know what you've done to this, if I'm honest

It is a very short life, isn't it? Completely different texture That is smooth That melts, doesn't it? It does It melts in your mouth That's almost soft serve vanilla ice cream

Yeah, it's really creamy And not overly sweet either I think what you get here is a tang that you don't get from the mascarpone here So this is, like, super light, like a mousse And that is a bit denser, a bit more tangle

You see the shine on top? Soggy bottom? Is that a thing? A very different base to this one because it's been baked It's kind of taking what I like that one and what I like I about that one and combining the two Yeah It's fuller that one It's less airy

Hats off to James This is his sour cream topping It's something I've never heard of it before, but that's a nice a little touch, James That beautiful shine Sometimes a baked cheesecake will crack

This covers the cracks That one makes it feel like home cooking That is, like, decadent And that's a quick cheat The key thing is they're all made with good vanilla

I think this is too tight to call with just our opinions I think we need a little twist A little blind taste test? Now, we can't actually take credit for this This was an idea from a guy called Killian, who commented on the Ramen video saying, wouldn't it be great if we had somebody come in and blind taste test it? Mike has not been involved in any of this process He doesn't know what cheesecakes we've made

I've got you Whoa, no you haven't OK, so, we're going to feed you OK And for you people at home, they're in the same order that they were on the table a moment ago

Wow, here we go Don't have to make the train noises That's delicious Oh, it's very buttery You're getting the taste of cream cheese, or what feels like cream cheese

Camera's over there OK So you're getting the taste of cream cheese It's buttery The base was chewy, like a fresh base, I would say

So not a cooked base Oh That is a little bit crunchier The texture is far thicker and gloopier, almost like yogurt but still very delicious and quite cheesecakey Ben chose the portion sizes, just FYI

This is nice and biscuity and crunchy A little less sweet but smoother Now if you were to guess in order of varying degrees of difficulty and time, what order would you put them in? I'm starting to think the first one may have been a baked one because the texture was firm and tasted like an amazing cheesecake Whereas this next two, I don't know So I'm going to say, the first one I ate was the most difficult

The second one I ate was the easiest, and the last one was the middle Nailed it! Nailed it! Goes to show– There is a difference Yeah, it's well worth it, well worth the effort, I would say Was that the first one I had? This one was baked It was baked

What should we be comparing next? Comment down below and go to the forum and talk about it All the links are downstairs As we mentioned, Sorted is just run by a group of friends So if you like what we're doing, then there are loads of ways that you can support us and get more involved Everything you need to know is linked below

Thanks and see you in a few days So we used, like, good vanilla ice paste for that as well So you get a really good flavor of vanilla