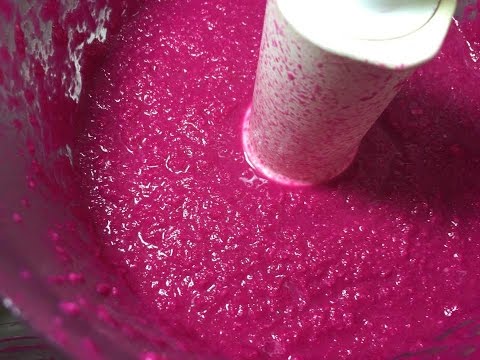 Ok, we're preparing for Passover The matzah brei is frying in a pan It's Monday today There are no live fish available Only fish that died someday The carps – we'll wait until Wednesday (for the Gefilte Fish) Meanwhile, let's cook And this is Satan's cane No, no, hey, hello! No, it's not that We have to make (beet) horseradish Now I don't want to grind it by hand So we'll do that in two steps First, through a grater Second, we'll chop it with a knife To make it thinly sliced The problem is That Fire particles are going to fly out of the food processor Therefore I'm going to split the root in half, so it will be fine I'll cover it So it won't back fire, as usual First, we'll have to peel it, of course I split it in half, ok? As I said – that's it Off we go Oh, it's going to be loud, so I'll turn off the recording Because it's bad for our ears I have a pushing device, but I'll use it through the nylon half way Because the smell will still go around it One of the common mistakes, which I made as well Was to process the root without "protection" What does it mean without protection? Putting vinegar in the bottom The vinegar breaks the spiciness, and prevents it from surfacing up First, sugar – just a bit Then we'll balance the sugar as we wish There are very long pieces in the food processor It's not the edible horseradish What about the beet? I'll talk about it in a bit (no pun intended) At this stage, I take the knife Put it in the food processor Put the cover And turn it on Where's my nylon cover? There it is Still, some smell is going to surface And that's not what I want Let's get to work Here I have beet That I prepared in advance The degree in which the horseradish's flavor is blocked (almost chokes by the EXTREMELY STRONG flavor) Excuse me The degree in which the horseradish's flavor is blocked is set by the amount of beet and liquids Yes, yes too strong There's also some turnip, which you shouldn't add Unless you really want to

That's it I'll pour some of the beet's liquids This beet is a few days old, meaning that it already absorbed flavors which is great Off we go We're missing some liquids I usually add vinegar and sugar, but I have the beet salad which already contains liquids So we can "steal" some of these Generally, I really knead it Knead the horseradish To prevent big chunks Ok Well, we'll meet again once I balance the flavors I added some more beet Because the color turned out somewhat pale By the way, some people make white horseradish Then they add either cream and mustard or mayonnaise Every one and their preference, we like it read We need to taste Yes, yes, this is the exact balance Hell on earth Feels like I'm punished for my sins, by it's cool NOT OK! (the taste, as mentioned before, came out deadly spicy) Ok, sugar And we'll balance with a pinch of salt Two pinches The horseradish is still chunky So I'll grind it until it's fine ground Ok, when a Polish Jew said: "Neither your honey nor your sting", he didn't refer to a bee A referred to the horseradish You can see that the color is amazing We're not going to compensate for risk taking (for those who are going to try this) Wow, "GEHENEM" (as in "hell" in Yiddish) Ok, what's left? To box it I'll add a bit more sugar That's it, this is the horseradish There you go Ok, I have to satisfy my curiousity And my desire to snack Yes, yes Still "on the grill", as we say Incredibly soft You can see it's airy as well Yes, we'll zoom in and see Nice It's airy for sure And it's soft Very well Now, two enemies Two enemies We'll separate between them Eggplant hreimeh And Polish "honey" The color is amazing Roasted eggplant on the grill With hreimeh Matbuha, however you name it I find this delicious in every language That's it We passed the first step of the preps And for you – good luck!